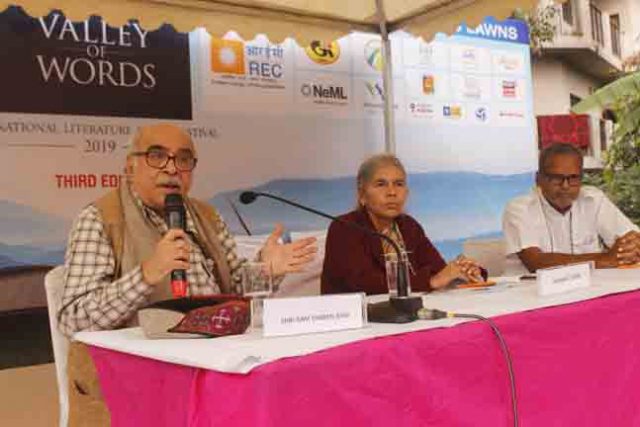 DEHRADUN, 15 Nov: An extremely engaging session on the journeys of life, especially those undertaken in remote areas, including the Himalayas, was held this afternoon on the opening day of the three-day Valley of Words (VoW) International Literature & Arts Festival. The session was moderated by Prof Jaiwanti Dimri and featured two writers – Ram Sharan Joshi and Ajay Sodani – both of whom have written about their various journeys of adventure in life. Joshi’s book is titled Main Bonsai Apne Samay Ka, while Sodani’s book is titled Darakte Himalaya Par Dar Badar. The importance of travel, especially to remote areas, was discussed at length by the two writers and highlighted as a means of enriching one’s personality and life. Sodani, who visits the Uttarakhand Himalayas frequently, said that the inhabitants of the hills live with some age-old traditions and beliefs which look upon nature as the supreme power. “Some people try to bring about changes in this lifestyle, not realising that such values and beliefs make for a good life,” he said. Prof Dimri said that Sodani had undertaken a post-modernist deconstruction of various myths and this made his work unique. Ram Sharan Joshi, a veteran journalist, said he felt that his dream of creating a society where there was no inequality or injustice had remained unfulfilled. “I realised many of my dreams in life, but could not improve society at large. Thus, I feel that I am a Bonsai.” He said people should read books like Baburnama, Discovery of India and Rousseau’s Confessions as these could make one understand a lot about life. Rahul Sankrityayan was mentioned in the discussion as an iconic figure, who travelled widely and wrote about his wanderings at length.

Garhwal Post has established itself as a credible, balanced and forward looking newspaper in India. Based in Uttarakhand, the daily is read by the aware, socially and culturally responsible, high-income elite of society.
Contact us: info@garhwalpost.in
https://garhwalpost.in/widow-dating-service/