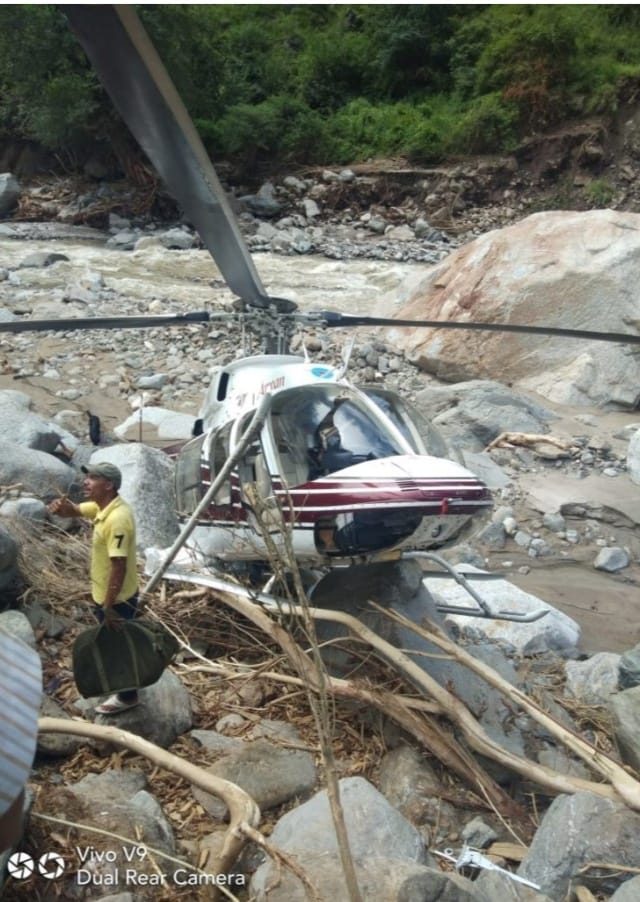 Dehradun, 23 Aug: Yet another helicopter engaged in rescue and relief operations in Uttarkashi met with an accident today. This time, fortunately, the helicopter crash landed and there were no fatalities. According to the information reaching here, the accident occurred at around 2.15 p.m. in village Nagwada Ticochi, District Uttarkashi. The chopper was engaged in relief operations following the cloudburst in Mori Block of Uttarakashi.
The pilot, Sushant Jana, resident of Jabalpur in MP, and the engineer, Ajit Singh, who hails from Haryana, escaped with minor injuries. Ironically, once again, the chopper accident seems to have occurred due to the wires of a trolley used to transport fruit. According to the reports, while flying from Arakot to Chiva, the helicopter collided with the trolley cables and the pilot pulled away from the spot, attempting an emergency landing on the river bank. However, it lost balance and crashed landed into the stones lying on the river bed. Luckily, the chopper did not catch fire. However, the chopper has been damaged to a considerable extent!
The chopper had already done two sorties carrying relief material to the affected villages in Mori Block. It was carrying the relief material for the third time when the accident occurred. The SDRF team managed to reach the spot and oversaw the rescue of the crew members.
As was the case in the other accident, the ground staff of the district administration appears to be at fault. The staff apparently failed to mark the ropeway cables so that they could be visible from a safe distance.
It may be recalled that a chopper had crashed in the same area in village Moldi on Wednesday in which three persons including the pilot and the co-pilot were killed. This helicopter belonging to M/s Heritage Aviation Company had also got entangled in trolley cables passing through the area chosen for landing. After the accident, air services for relief operations were put on hold and resumed just today, and this was the third sortie of the chopper since morning.