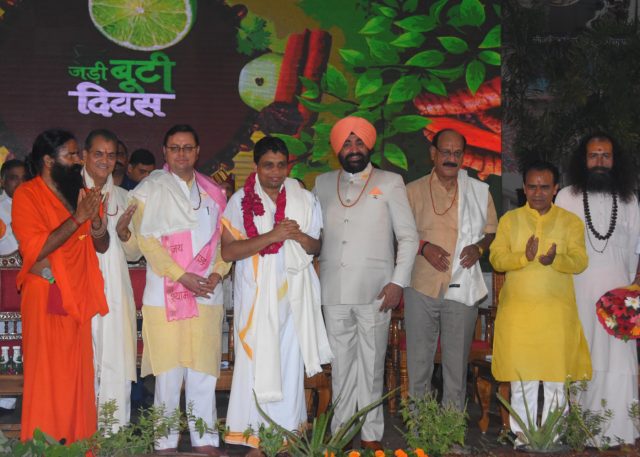 Dehradun, 4 Aug: Governor Lt Gen  Gurmit Singh (Retd) and Chief Minister Pushkar Singh Dhami participated in a ‘Herbs Day’ programme organised at Patanjali Yogpeeth in Haridwar today. On this occasion, they jointly released 75 books based on herbs and Ayurveda medicine and 51 new medicines as part of the Amrit Mahotsav of Independence.

On this occasion, the Governor also greeted Acharya Balkrishna of Patanjali Yogpeeth on his 50th birthday and said that celebrating the occasion as Herbs Day by the Acharya was a unique initiative for prosperity and also aimed at conservation of nature. He said that Patanjali Yogpeeth is carrying forward the tradition of the sages who had taken India to the glory of Vishwa Guru on the strength of knowledge, science, culture, research and spirituality.

The Governor added, “Yoga, Ayurveda, Yogic and intellectual knowledge, herbs, medicines are going to enhance the status of India as the Vishwa Guru. The identity of India is due to its civilisation, culture and Ayurveda. We are again moving towards getting the recognition as Vishwa Guru, in which Patanjali is also seen moving forward in the role of leadership.”

Singh claimed that in Patanjali’s vision, ideas and feelings like self-reliant India, intellectual property, artificial intelligence were inherent and which were the need of the present times. He said that on the occasion of the 75th anniversary of independence, 75 books on herbs and Ayurveda medicine had been launched. Herbs Day would reinforce the basic concept of happiness, peace and prosperity in the lives of the people. India had modernised the great tradition of Yoga and Ayurveda.

Dhami added, “Ayurveda is not just a medical system, it can be described as a holistic human philosophy. Ayurveda is heritage through which the welfare of the whole world can be ensured. During the Corona period, the world adopted the principles of Ayurveda and reaped great benefits. Ayurveda is a holistic science of life, and today it is accepted all over the world. Ayurveda is not limited only to the treatment of a patient, but in Indian philosophy it is accepted as the basic knowledge of life, hence it has been named as the fifth Veda.” The CM noted that a new methodology had emerged under the leadership of Prime Minister Narendra Modi. Yoga Day is being celebrated across the world on 21 June every year. Under the Amrit Mahotsav of Independence, a mass movement to hoist the tricolour at every home is being run all over the country. He urged everyone to make Uttarakhand a leading state in every field by 2025. He said that Prime Minister, Narendra Modi, in a global programme held recently, had highlighted the importance of Ayurveda and observed that the system is highly effective from the plant to the plate and towards improving physical strength as well as mental wellness.

Garhwal Post has established itself as a credible, balanced and forward looking newspaper in India. Based in Uttarakhand, the daily is read by the aware, socially and culturally responsible, high-income elite of society.
Contact us: info@garhwalpost.in
single women bismarck nd free dating in karachi dating profile icebreakers