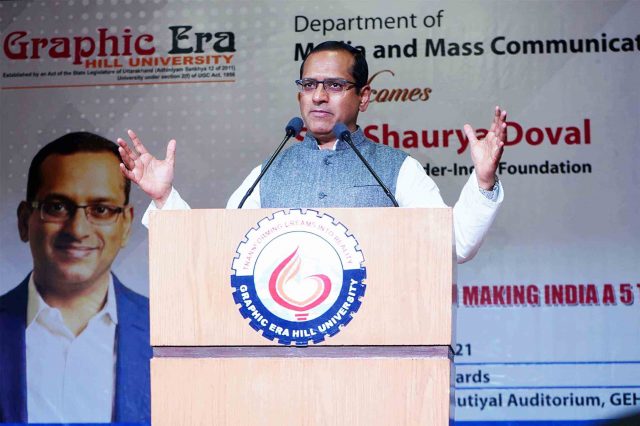 Dehradun, 8 Feb: Shaurya Doval, co-founder, India Foundation, said today that the youth of India could play a significant role in giving a boost to the Indian economy. He said that the youth should envision the future by working on ideas of tomorrow to build a better economy.
The Media and Mass Communication Department of Graphic Era Hill University organised a guest lecture on ‘Role of Youth in Making India a 5 trillion dollar Economy’, at which Doval expressed his views on youngsters being the change-makers of the Indian economy and becoming the leaders of tomorrow.
Comparing the economic growth of India, pre and post independence, Doval said that progression is not constant, and compounds with time. From being a 30 billion dollar economy post-independence, India had become a 3 trillion economy today. He added that growing sectors like Telecom, Consumer Durables, Industries, Finance, Health Care, Utility and Material were areas that would attract youth and give new opportunities. However, he pointed out that cities like Delhi, Haryana, Gujarat, Maharashtra and Tamil Nadu would benefit most out of this growth.
Pointing to the fact that the nation’s growth was not always uniform, Shaurya said that the youth of the country had to switch from being job seekers to being job creators. It would involve competition but also opportunities and they would have to survive using new skill sets and the latest technology, thereby bringing about a revolution in the economy.
Shaurya reminded that India had achieved several milestones and one of them was eradication of corruption, the main hindrance to economic growth. At present, there were various steps that had been effective in enhancing the economy. Some of these included attracting foreign investment, reducing tax rates, unblocking resources, eradicating corruption, and encouraging citizens to pay tax. Citing one of the recent milestones during the Covid pandemic, he said that India was among the only six countries in the world that had developed its own vaccine.
Shaurya said further that the youth could be the next leaders if they were hardworking, honest, adapted themselves to new technology and became the changemakers.
Graphic Era Hill University Vice Chancellor Dr Sanjay Jasola, Director, Infrastructure, Registrar Capt Himanshu Dhuliya, Head, Media and Mass Communication Department, Himani Binjola Tiwari, Dean, School of Management, Vishal Sagar along with other faculty members and students were present on the occasion.
Dr Subhash Gupta, Director, Infrastructure, proposed the vote of thanks, and Vidushi Negi, Assistant Professor, convened the event.