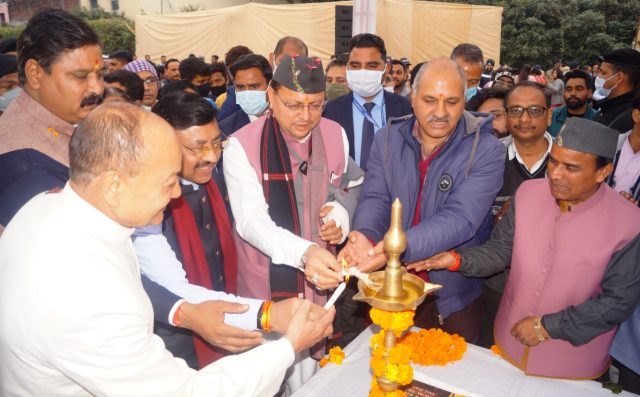 By Our Staff Reporter
Haldwani, 28 Dec: Chief Minister Pushkar Singh Dhami, Urban Development and Parliamentary Affairs Minister Bansidhar Bhagat and Higher Education Minister Dr Dhan Singh Rawat jointly inaugurated a grand skill and employment fair, here, today. On this occasion, Chief Minister Dhami also distributed appointment letters to 42 youths and women.
Addressing the youth and women who came from the districts to the skill and employment fair, Dhami said young people are energetic but their energies ought to be channelised properly. He said that employment fairs were being organised continuously by the government in all the districts of the state. These fairs were providing employment opportunities to the youth. Unemployed youth of the state could register for the employment fair sitting at home. The main objective of the government was to increase self-employment along with employment. He said that 3700 homestays were registered in the state, in which 8000 youth and girls were getting self-employment. He said that the recruitment to vacant posts in the Police Department had not been done in the state for a long time but now the process had been started. Work was being done to fill the vacancies in all the departments where posts were lying vacant. The government had made a provision to increase the amount up to Rs 25 lakhs in the Veer Chandra Garhwali Yojana for self-employment, and the amount of subsidy for homestays had also been raised. He said the government had increased the age limit for government jobs by one year and the applicant would not have to pay any fee for filling the application fee of the examination form in the state, as well as for the preparation of IAS, PCS, MBBS and Public Service Commission. The children who pre-qualify were being given Rs 50,000 thousand by the government for further preparation.
The Chief Minister stressed that the government was committed to Vocal for Local. This was being promoted through self-help groups to bring regional products to the market. He said that it was the effort of the government that all the youth of the state be linked with employment and self-employment.
Thirty-five companies of the state participated in the big skill and employment fair held at the HN Inter College. As many as 1150 youth and women from various districts got themselves registered. On this occasion, 7 people were appointed by three companies by conducting virtual online interviews of 162 youths.
Chief Minister Dhami also participated in a function as the Chief Guest at the Hotel Crystal complex and congratulated the newly elected office bearers of the Provincial Industries Board. He administered the oath of office and secrecy to the newly elected office bearers. The Chief Minister was presented a memento and shawl by the Board of Trade. He said that the government would try to fulfil the demands of the traders.
On this occasion, newly elected President Yogesh Sharma, Vice President Sachin Gupta, General Secretary Manoj, Geeta Kandpal, Sandeep Saxena etc., were present. The programme was conducted by State President Naveen Sharma.