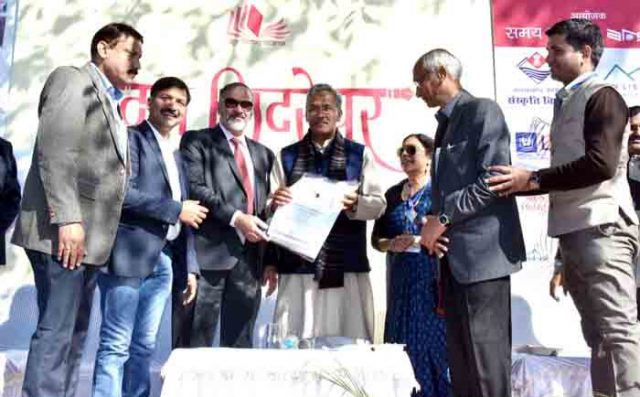 DEHRADUN, 21 Dec: Chief Minister Trivendra Singh Rawat told youth and students here, today, that books had their own importance and credibility even in this era of digitisation of social media, newspapers and literature. The new generation should maintain the habit of reading newspapers, magazines and books. He said that literature combined the past and the future and guided the present. The importance, reliability and credibility of any article or subject matter increased if it went through the process of becoming a book. Developing an interest in reading books among children was the challenge of the digital age.
The Chief Minister was addressing students, litterateurs and readers on the occasion of the ‘3rd Doon Literature Festival 2018’, organised by ‘Action and Research Society for Himalayas’ at the Shahanshahi Ashram, here, on Friday.
Rawat said that the younger generation should not only focus on news of their interest, need and priority on the internet and social media, but also take interest in the study of newspapers, books and literature, so that they could develop a comprehensive approach. He said that by organising the Doon Literature Festival, healthy traditions were being followed.
On the occasion, the Chief Minister also released “Padaav”, the Festival Souvenir. Dr S Farooq, Achalanand Jakhmola and other writers, readers and students were present.