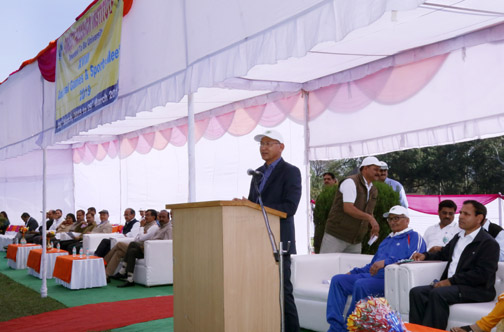 By OUR STAFF REPORTER
DEHRADUN, 26 Mar: The 18th Annual Games & Sports Meet of FRI (Deemed) University was inaugurated here, today, by Dr SC Gairola, Director General, ICFRE, & Chancellor of the University, at the University Grounds. All the students of FRI University including PhD Research Scholars are taking part.
On the occasion, Registrar Dr AK Tripathi delivered the welcome address and proposed the vote of thanks. The Sports Officer of the University administered the oath to the students. The students represent four houses – Teak House, Pine House, Sandalwood House and Sal House. All houses participated in an impressive March Past and Chief Guest Dr Gairola took the salute. The Best Marching Contingent Award was won by Pine House, while Sandalwood House was declared the runner up.
Congratulating and boosting all the participants for being ready to put up a tough and healthy competition, the Dr Gairola said, “Sports and athletics activities are important components in the growth of an individual, mentally as well as physically. Such types of competitions rejuvenate the person’s capability to take on his day’s work more efficiently.”
AS Rawat, Director, FRI, & Vice-Chancellor of the University advised the students and scholars to put in regular practice. He also placed emphasis on participating with team spirit.
The students are competing in the 100 mts, 200 mts, 4×100 mts, 800 mts, 1500 mts, and Cross country races for both Men and Women. Beside the races, there will be Shot-put, Javelin throw, Discus throw, Long Jump, High Jump, Cycling and Tug of war competitions in, both, Men and Women categories. Volleyball matches are in the men’s category only. The students are also participatin in Badminton, Chess, Table Tennis and Carom. Cricket matches on knockout basis will be played during the meet among the four houses.
The four day Meet will conclude on 29 March at 2 p.m. with a staff race, tug of war and prize distribution.
The results of today’s forenoon events were: Shot Put – Men –Vaibhav (Sandal Wood House), First; Nir Kumar (Teak House), Second. Women – Sandal Wood’s Anshu, First; Pine House’s Garima, Second. In the 1500 metres race for Men, Suraj of Teak House was First; while Ashish of Sal House was Second. In the women’s category, Sandal Wood’s Surbhi was First, followed by Teak House’s Apoorva.