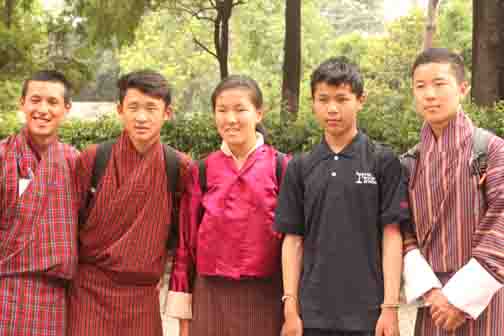 By OUR STAFF REPORTER
Dehradun, 4 Jun: The 6th edition of ‘Summer At Doon’ concluded yesterday in the Doon School with the prize giving ceremony presided over by Headmaster Matthew Raggett. Rohan Thakur (IAS) an Old Boy of the school, presently Director of Information Technology and the Managing Director of the State Skill Mission, Himachal Pradesh, was the Chief Guest. Kamal Ahuja, the Deputy Headmaster, was the Master of Ceremonies.
A total of 76 students from 14 states of India and 5 from Royal Academy, Bhutan, participated in the two week long experience of Doon School life. Apart from the normal daily routine of classes, games and hobbies like music, theatre, art, etc., the students also visited the Himalayan Environmental Studies and Conservation Organisation (HESCO), Purkul Youth Development Society (PYDS), did river rafting and undertook a trek to Surkanda Devi. Apart from the Socratic dialogues, the participants got to hear some motivational talks by Old Boys of the school like Rahul Kohli, President of the Doon School Old Boys Society, Shrey Guleri (Guleri Productions), Chetan Agarwal (APS to Railway Minister Piyush Goyal), Anirudh Kapur, an entrepreneur from Dubai, and Dr Anil Joshi, the founder of HESCO.
Tenzin, a girl from the Royal Academy, Bhutan, and Tara from Delhi said that, at first, they were shy and apprehensive about whether they would be able to cope with the two week programme with so many unknown people, but at the end they had many friends and would be going back with a lifetime experience and memories.