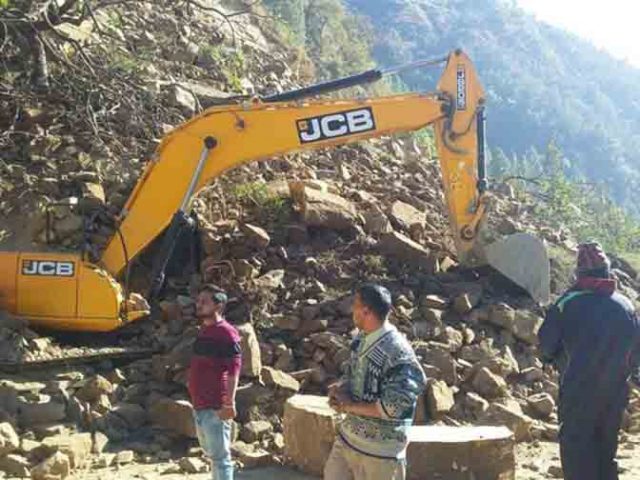 Rudraprayag, 21 Dec: Seven workers were killed by a landslide that took place in Banswara area on the Rudraprayag-Gaurikund stretch of the under-construction All Weather Road. All the dead are reported to be from J&K.
While work was underway on the stretch, today, a part of the hillside caved in and fell on the road. At the time, 23 labourers were working at the site and 10 among them were buried under the landslide. A JCB was also swept away into the river below.
Seven of those buried died on the spot, while three suffered injuries. On receiving information, a rescue team and the police reached the spot. The bodies of the dead workers were retrieved and the injured taken to hospital. Later, they were airlifted to AIIMS, Rishikesh.
According to the DM and SP, cases had been registered against the Contractor for negligence. An inquiry committee has been constituted under SDM Gopal Singh Chauhan.
Chief Minister Trivendra Singh Rawat has expressed grief at the incident that took place between Bhiri and Banswara on National Highway Number 107.
On the instructions of the Chief Minister, Secretary, Civil Aviation, Dilip Jawalkar immediately sent a rescue helicopter to the spot. Two seriously injured workers have been brought via helicopter to AIIMS Rishikesh for treatment.

Garhwal Post has established itself as a credible, balanced and forward looking newspaper in India. Based in Uttarakhand, the daily is read by the aware, socially and culturally responsible, high-income elite of society.
Contact us: info@garhwalpost.in
woman looking for man in daveyton