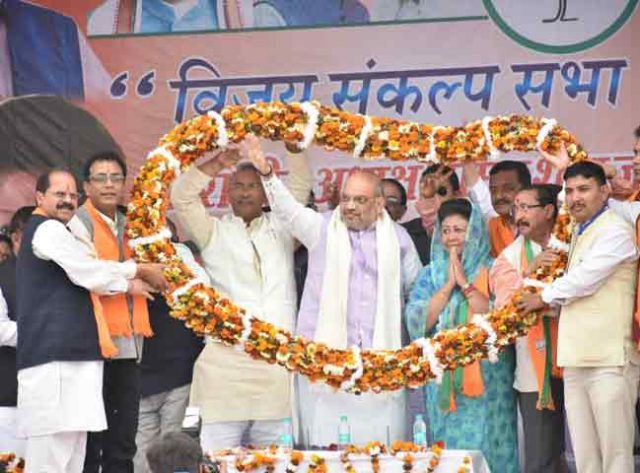 Dehradun, 3 April (IANS): BJP President Amit Shah on Wednesday slammed the Congress for its silence on the National Conference chief Omar Abdullah’s demand of a separate Prime Minister for Jammu and Kashmir.
“Omar Abdullah says there should be a separate Prime Minister in Kashmir. His associates are raising pro-Pakistan slogans. But Congress is silent. I want to ask Congress President Rahul Gandhi to clarify whether you are supporting or opposing this demand,” Shah said at an election rally in Uttarkashi town in the Tehri constituency of Uttarakhand which is going to the polls on April 11.
Shah, however, made it clear that the BJP would oppose the demand of a separate Prime Minister tooth and nail. “Till we are alive, we will never allow this demand to be fulfilled,” he said.
In this context, he reminded the people of the “sacrifice” of the BJP leader Shyama Prasad Mukherjee who strongly opposed Article 370 that gives autonomous status to Jammu and Kashmir state.
“We are following the path of Shyma Prasad Mukherjee and we will not allow such thing to happen,” Shah said.
Referring to the manifesto of the Congress, Shah attacked the opposition party for seeking the scrapping of the sedition law.
“Who are you protecting? In JNU, they (students) called for dividing our country into thousand pieces. But you stood silent outside. Do you want to protect all those who are facing sedition charges,” he asked.
He also claimed that the Congress wanted to repeal all laws that provide security to the armed forces. “You cannot simply do it. We are standing like rock with the armed forces,” he said.
Referring to the Pulwama terrorist attack in February, he said only Prime Minister Narendra Modi has the stamina to retaliate against terrorists.
“When the Pulwama attack occurred, there was commotion and sadness all around the country. But our Prime Minister launched a big attack against terrorists. This attack occurred when there was no possibility of a surgical strike due to the heightened security on the borders by Pakistan. But we carried out airstikes and destroyed all terrorists,” he said.
After the Balakot attack, he said a wave of happiness ran through the country and everybody looked happy.
“But our Rahul Gandhi and the Pakistan Prime Minister faces looked just the same,” he said, adding that the country will never be secure under Congress rule.
“If you want to make India a powerful nation and global leader, only Prime Minister Modi can fulfill your aspirations,” he said.
He also asked the people to vote for BJP in all the five seats in Uttarakhand to repeat the feat of 2014. “We are on the path of development. This development will continue,” he said.
The rally was also addressed by Chief Minister TS Rawat, Tehri candidate Mala Rajyalaxmi Shah and MLA Omgopal Rawat and others.