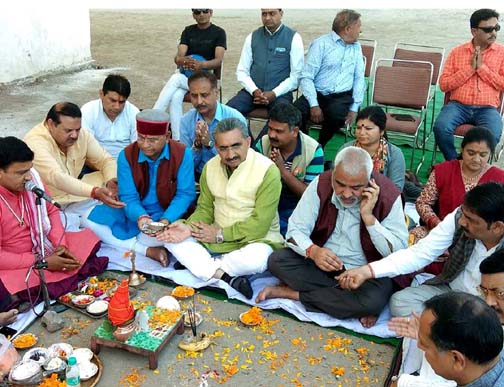 By OUR STAFF REPORTER
Dehradun, 3 Apr: Prime Minister Narendra Modi is to address a public rally at the Parade Ground on 5 April. This will be his second rally in the state after announcement of election dates. Earlier, he had addressed the public in Rudrapur on 27 March.
BJP leaders, today, carried out ‘bhoomi pujan’ at the rally site for the success of the PM’s rally.
Present on the occasion were Mayor Sunil Uniyal ‘Gama’, Rajpur MLA Khajan Das, BJP office-bearers Jyoti Prasad Gairola, Puneet Mittal, Anil Goyal, etc.
The State BJP has completed preparations for the rally. Around one lakh people are expected to attend. According to Mayor Gama, the BJP would comfortably win all five seats in the state. The State Government had worked to eliminate corruption, because of which the BJP had the people’s support. The Modi wave continued to prevail in the country, which would ensure the return of the BJP to power. The Modi Government had done work that had not been done in the years before.