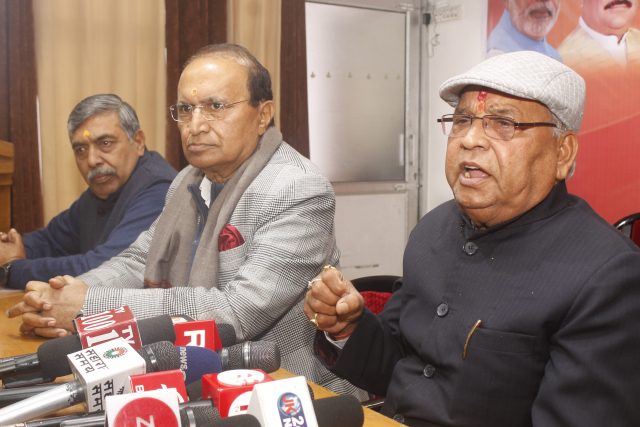 Dehradun, 7 Mar: Addressing the media at BJP State Headquarters here today, State President of BJP, Bansidhar Bhagat said that BJP had courage to declare Gairsain as the summer capital of Uttarakhand. He was responding to a question why BJP Government declared Gairsain only as a summer capital and not as the permanent capital of the state. Bhagat stressed that Congress too ruled the state for ten years but could not gather courage to declare Gairsain as even the summer capital. Admitting that it was a huge challenge to create the required infrastructure in Gairsain to enable the hill town to function as the summer capital, he added that BJP was always willing to take challenges in its strides as it was a party of committed workers who never shied away from hard work and challenges.
Bhagat also informed that in each assembly constituency, BJP leaders led by the local MLA would go to the houses of almost every party worker to inspire and encourage him. This would start on 18 March, when the BJP would be completing 3 years in power in the state. He claimed that BJP would win the next assembly elections with a thumping majority and no force or political party would be able to stop the BJP from retaining power here.
Among those present at the briefing were BJP Vice President Devendra Bhasin, Party Vice President Kuldeep Kumar and BJP spokesman Vinay Goyal.