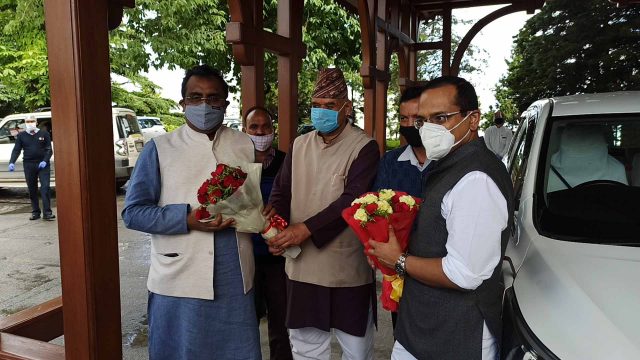 By Our Staff Reporter
Mussoorie, 26 Jul: BJP National General Secretary Ram Madhav and Director, India Foundation, Shaurya Doval arrived on Saturday to attend the Uttarakhand Youngsters’ Meet to be held in Doon. Later, they reached the Savoy Hotel, here, where Mussoorie MLA Ganesh Joshi, BJP Mandal President Mohan Petwal and General Secretary Kushal Rana welcomed the two with bouquets of flowers. Shaurya Doval said that the development of Jammu and Kashmir was underway. He declared that the issues with Nepal would be resolved as India and Nepal have a spiritual and historical relationship.
Doval added that Congress leader Rahul Gandhi needed to understand the depths of the problems the nation faced, along with the political aspects. He should not make hollow statements on national issues.
Shaurya Doval claimed a lesson would be taught to China in the coming times. Prime Minister Narendra Modi had called upon the whole country to become self-reliant, which had not been achieved in the past during Congress rule. Schemes like Make in India, Skill India, Digital India were ongoing to make the country self-reliant.
He claimed that Pakistan was not a challenge for India. Pakistan created problems for India through terrorism, but in the coming days, the terrorism flourishing there would be put to an end in a planned manner. He said that India is a big country; it should not be distracted by small problems. He also welcomed the proposed laying the foundation of the Ram Temple in Ayodhya by PM Mode. It was a matter of self-respect and pride for all Indians, which was necessary to become self-sufficient.

Garhwal Post has established itself as a credible, balanced and forward looking newspaper in India. Based in Uttarakhand, the daily is read by the aware, socially and culturally responsible, high-income elite of society.
Contact us: info@garhwalpost.in
dating agencies in manchester lgbt aa meetings hot mature dating