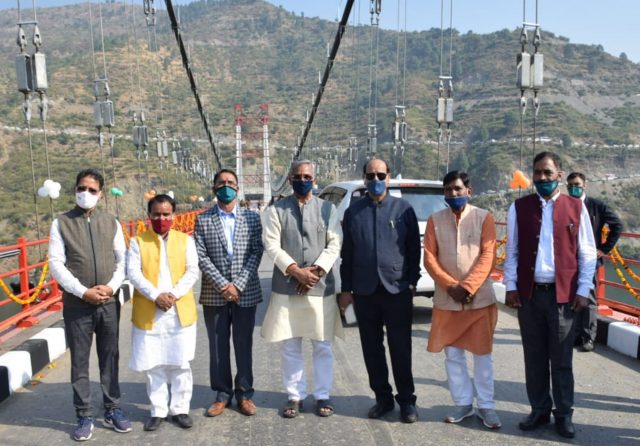 Tehri, 8 Nov: Chief Minister Trivendra Singh Rawat on Sunday, the eve of State Formation Day, inaugurated the much awaited Dobra-Chanthi Bridge, here, as a big gift to the people of Tehri. While inaugurating the bridge, Chief Minister Rawat said that this heavy vehicle suspension bridge, costing approximately Rs 295 crore, had been awaited by local residents for the last 14 years. Now, finally, movement on the bridge had started. Along with this, the Chief Minister also laid the foundation stones and inaugurated various 60 schemes. These include the inauguration of 30 schemes and the foundation stones of 30 schemes. Among the launched schemes, 9 are related to PWD, 7 to PMGSY, 10 to the Education Department, 2 to Tourism and 1 each to Departments of Ayurveda and Sports. Others have to do with PMGSY, Tourism, Education and Horticulture Department. On this occasion, the Chief Minister also made an announcement regarding the Government Inter College, Majaf.
Addressing the people of the area present in large number at the programme, the Chief Minister said the people of Pratap Nagar had made a huge contribution in the interest of the country, due to which the availability of irrigation and uninterrupted power supply was possible all the way up to eastern Uttar Pradesh.
He expressed regret to the people of Pratap Nagar for delay in the construction of the bridge and said that the Uttarakhand Government approved a lump sum for expediting the construction of this bridge, due to which it had been achieved completion. He declared that, today, the door of development had opened for the people of Pratap Nagar, and the bridge would become a source of prosperity for future generations.
The Chief Minister reminded that the 42 km long Tehri Lake had the potential to attract people from across the world. It would also become the centre of adventure tourism and many tourism activities would start in its vicinity, paving the way for economic prosperity.
With the construction of the Dobra-Chandhi Bridge, this area would also be a centre of attraction for tourists. Time and money would also be saved in the traffic. On this occasion, the Chief Minister said that good governance and corruption-free development, and improvement of health facilities in the state were the priorities of the government.
Agriculture Minister Subodh Uniyal, Higher Education Minister Dr Dhan Singh Rawat, MP Mala Rajyalakshmi Shah, District Panchayat President Sona Sajwan, MLA Vijay Singh Panwar, Dhan Singh Negi, Shakti Lal Shah, Abbal Singh Bisht, Roshan Lal Semwal, Mahavir Rangad , District Magistrate Eva Ashish, Heads of various blocks as well as other officers, public representatives and a large number of regional people were present on the occasion.