HARIDWAR, 2 Apr: With humans off the roads, increasing incidents are being witnessed of wildlife straying into towns and cities. Last night, at around 1:15 a.m., an elephant was seen strolling on the Bhagat Singh Chowk railway track. Fortunately, the trains are not plying these days otherwise there could have been a tragic outcome.
On receiving information, the police and personnel of the forest department managed to steer him towards the Rajaji Park through the Tibdi Gate. At around 3 a.m., there was another sighting of an elephant, this time in the Har-ki-Pauri areas. The forest department and police were, once again, summoned to the spot.
The elephant returned to the jungle via Mansa Devi, Brahmpuri and Kushaghat. Videos of both incidents became viral since the morning.
According to DFO Akash Verma, a solar powered fence had been set up last year to keep the elephants out with some success, but the lack of human presence had encouraged them to return. It was important that they did not begin to habitually enter the city areas. Patrol teams are being tasked to keep an eye out and people, also, have been asked to be careful. 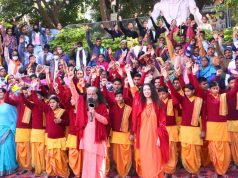