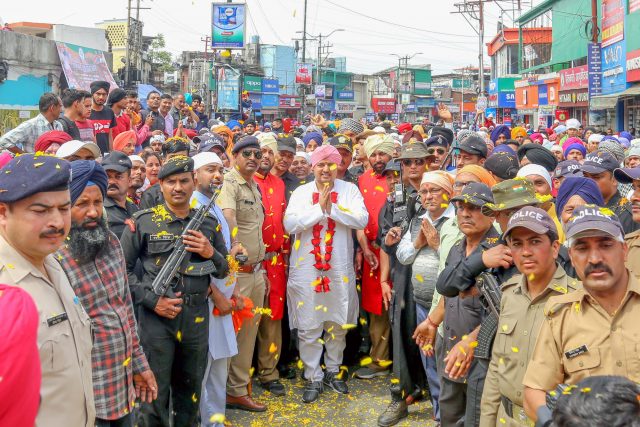 By OUR STAFF REPORTER
DEHRADUN, 27 Mar: Led by Mahant Devendra Dass, the historic ‘Nagar Parikramma’ was held here today. Doonites welcomed the procession with showers of flowers. Throughout the route of the procession, devotees chanted the praise of Guru Ram Rai. This traditional celebration took place on the third day of the birth anniversary celebrations of Guru Ram Rai. Doonites flocked in the thousands along the entire route to welcome the ‘Parikramma’. Devotees and spectators alike received the blessings of the Mahant.
The ‘Parikramma’ started from the Darbar Sahib at 9:30 a.m. It reached Shri Guru Ram Rai Public School, Bindal, via Saharanpur Chowk and Kanwali Road. Here the devotees were distributed ‘prasadam’ of ‘Chana’ ‘Murmura’ and ‘Gur’. From there, it reached Tilak Road and then the Clock-Tower. In order to witness this sight, thousands of Doonites had gathered at Clock-Tower and nearby areas. From there, the ‘Sangat’ reached Lakhi Bagh via Paltan Bazaar. After this, the ‘Sangat’ paid its respects at the ‘Samadhi Sthal’ of former Mahants. It ended at the Darbar Sahib at 2 p.m.
More than 25,000 devotees participated. Doonites had arranged for warm welcome and refreshment for them during the entire procession. Among those present were Mayor Sunil Uniyal ‘Gama’, MLAs and office-bearers of various political parties. The farewell of the ‘Sangat’ and ‘Masandas’ took place at the Darbar Sahib at 5 p.m. At 6 p.m., the ‘prasadam’ was distributed.
Mahant Devendra Das said on the occasion that the ‘Sangat’ from India and abroad reach Dehradun to be a part of the procession. He thanked the Doonites for the warm welcome they offered to the devotees.