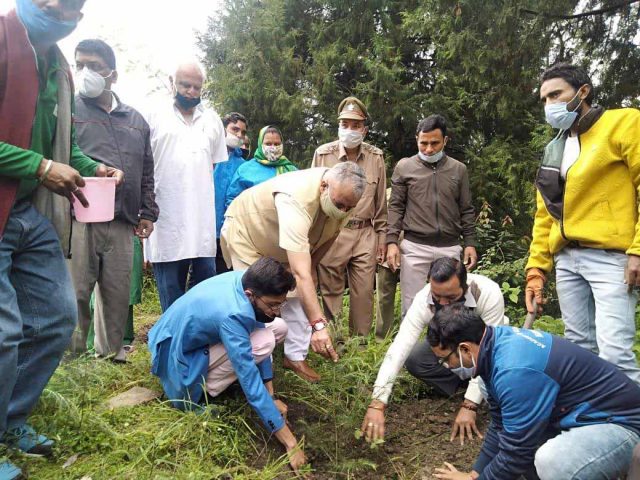 By OUR STAFF REPORTER
MUSSOORIE, 16 Jul: The Harela Festival was celebrated, here, with great pomp in various areas. In Kyarkuli Bhatta Village, people celebrated with enthusiasm and Mussoorie SDM Premlal and Police In-charge Devendra Aswal were among those who planted trees.
Chief Guest MLA Ganesh Joshi, along with BJP workers and youth, planted various species and fruit saplings at a programme organised at the Waverly Convent School, organised by the Municipal Corporation. Mussoorie Executive Officer Ashutosh Sati called on all the people to take care of the plants planted along with protecting the environment.
Tree planting was also done at Hampton Court School by Municipal Chairman Anuj Gupta. The Garhwal Mahasabha and Club Mahindra together planted various species of saplings in Bhadraj Temple and Lambi Dhar area. Planting was also done by the officials and employees of HDFC Bank in association with the Girls’ Inter College and Municipal Council. Lions Club Hills and Lions Club Mussoorie also planted trees at RN Bhargava Inter College. Mussoorie Mahatma Yogeshwar Shishu Mandir School students with members of the executive committee planted the saplings in the school premises.
MLA Ganesh Joshi said it was a good effort by the people to preserve the environment, while the state government was also planting more than two crore saplings in the entire state during the Harela festival. He said that, after planting the trees, their care was a challenge, which involved connecting the villagers with the MNREGA scheme and giving them the responsibility of saving trees.
Pandit Deendayal Upadhyay Action and Research Society President Neha Joshi said that there are many forests that look green but do not have trees, which was a matter of concern. In view of this, ‘Growing Tree Society’ of Mumbai and with the cooperation of the Department of Horticulture, about one lakh plants were being planted in Mussoorie and the surrounding area in a phased manner. Present on this occasion were Executive Officer Ashutosh Sati, BJP Mussoorie President Mohan Petwal, Kushal Rana, Shubh Visnoi, Executive Officer ML Shah, Mahavir Rana, Virendra Visht, Kiran Rana, HDFC Operations Manager Sanjay Sharma, Sharang Sharma, Rahul Sharma and Narendra. Many people were present including Kumar, Deepak, Kyarkuli village head Kaushalya Rawat, Rakesh Rawat, Shashi Rawat, Principal Manoj Rayal, Gaurav Garg, Anuj Tayal, Ravinder Goyal, etc.