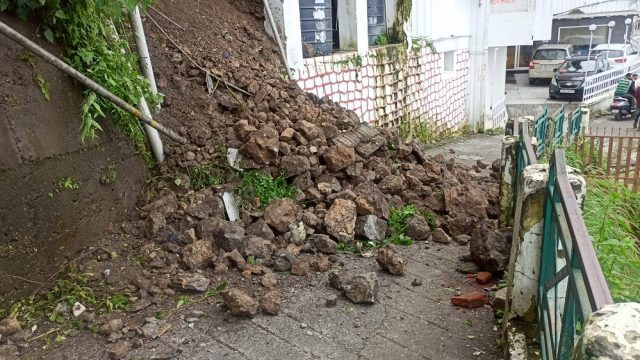 By OUR STAFF REPORTER
Mussoorie, 29 Jul: Incidents of landslides are increasing continuously in Mussoorie. A huge landslide took place near Samrat Hotel, here, today. It threatens the houses above it, while the rubble has blocked the road.
Officials from the SDM’s office, who reached the spot, have advised residents to vacate the house for safety reasons. Instructions were issued to remove the debris on the road. It is being said that due to heavy rains, the buttress of the house was filled with water, due to which it collapsed triggering the landslide. The administration is identifying the houses that are in danger due to landslides so that the people living in them may be shifted to other places at the time of heavy rains.