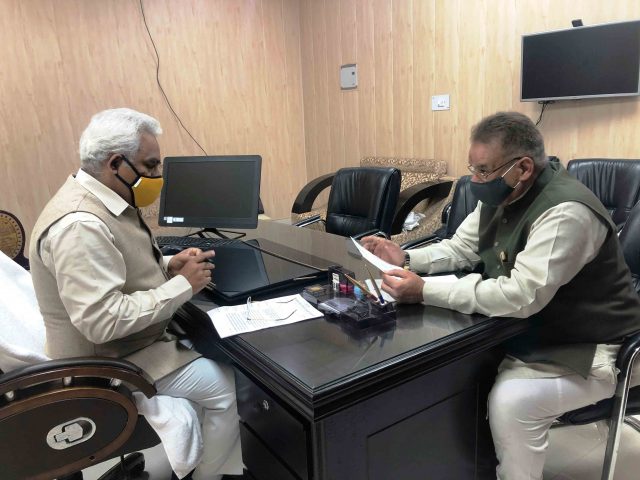 By Our Staff Reporter
Dehradun, 18 Nov: Mussoorie MLA Ganesh Joshi met Urban Development Minister Madan Kaushik at his camp office in Yamuna Colony here, on Wednesday, and raised problems of the Mussoorie Assembly Constituency. MLA Joshi informed him that, due to non-implementation of building construction and one time settlement scheme under the Pradhan Mantri Aawas Yojana in Mussoorie, the poor people were facing extreme hardships. He requested implementation of the One Time Settlement as well so that construction work under the Prime Minister’s Housing Scheme could begin soon.
MLA Joshi told the Urban Development Minister that he had earlier announced that a statue of former Prime Minister Atal Bihari Vajpayee would be installed in Mussoorie. Joshi said that Vajpayee was very fond of Mussoorie and had visited it many times.
Minister Madan Kaushik assured Joshi that soon a statue of Atal Bihari Vajpayee would be installed through the offices of the MDDA, and the Prime Minister’s Housing Scheme and One Time Settlement Scheme would also be implemented at the earliest.