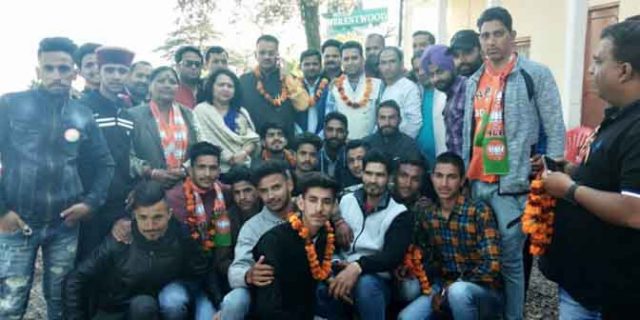 By OUR STAFF REPORTER
Mussoorie, 2 Apr: Mussoorie MLA Ganesh Joshi inducted a number of youths into the BJP at a local hotel, today. He claimed that a number of youths from the Congress and other parties were joining the BJP influenced by the work done by PM Modi.
He also interacted with people on the Mall Road on behalf of Tehri BJP candidate Mala Rajyalaxmi Shah. These included those selling corncobs, shopkeepers, and rickshaw operators. He appealed to them to support the PM by voting for the party candidate.
Also present were Vipin Rawat, Rajit Rawat, Ajay Chauhan, Ankit Rawat, Rohit Kaintura, Sanjay Panwar and others, many of whom had left the Congress. BJP office-bearers Mohan Petwal, Kushal Rana, Dharampal Panwar, Amit Panwar, Mukesh Dhanai, Rakesh Rawat, Kapil Malik, Mira Suriyal, etc., accompanied him.

Garhwal Post has established itself as a credible, balanced and forward looking newspaper in India. Based in Uttarakhand, the daily is read by the aware, socially and culturally responsible, high-income elite of society.
Contact us: info@garhwalpost.in
https://garhwalpost.in/websites-like-megapersonal/ https://garhwalpost.in/latin-matchmaker/