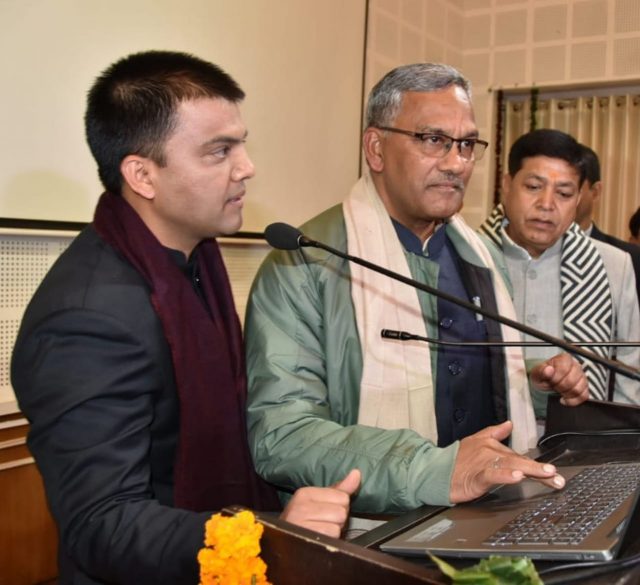 Derhadun, 24 Dec: A video song sung by Ramesh Bhatt, Chief Minister Trivendra Singh Rawat’s media advisor, was released by the Chief Minister at his official residence on Monday. The song is titled ‘Jai Jai Ho Devbhoomi’ and is of six minutes’ duration. It is the first ever release of Bhatt. Rawat was full of praise for the efforts of Bhatt and observed that though the video was just 6 minutes long, it depicted the rich cultural heritage and the abundant natural beauty of Uttarakhand. The CM expressed the hope that Bhatt’s effort would help create a new identity for Uttarakhand. Leading Jagar singer Basanti Bisht and Professor KD Singh were also felicitated by the CM on this occasion. Ramesh Bhatt said on the occasion that the lyric was penned by the late Gopal Babu Goswami. He had tried to introduce this song in a new form. The music has been composed by Sanjay Kumola, while the video has been directed by Arvind Negi. The cinematography has been done by cameraman Sandeep Kothari. Minister of State for Higher Education Dhan Singh Rawat, MLAs Munna Singh Chauhan and Dilip Singh Rawat, Mayor, Rishikesh, Anita Mamgai, Cine Actor and journalist Satish Sharma and Char Dham Development Council Vice President Shiv Prasad Mamgai, and Vice President, Uttarakhand Culture Literature and Arts Council, Ghananand were among those present on the occasion. Dr Nandan S Bisht and poet Arvind Malasi jointly hosted the evening.