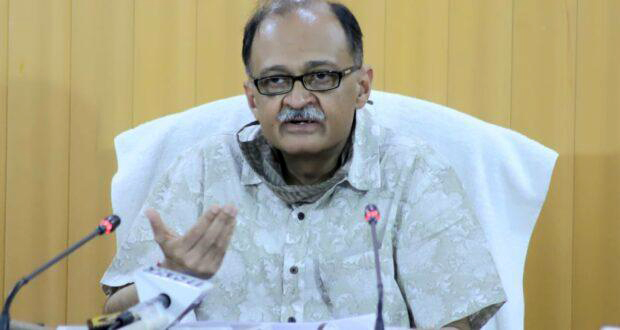 DEHRADUN, 8 Jun: Chief Secretary Utpal Kumar Singh reported today that 135 persons recovered from COVID-19 in the state, today. Of the total 1380 cases recorded, 697 remained active. The state’s doubling rate was improving constantly, reaching more than 16 days. The recovery rate had approximately equaled the national average at 48 percent. The percentage of positive tests was 4.31 percent against the national average of 5.37 percent. Sampling was up to 3169 per million. The country’s fatality rate was 2.78 percent, while that in the state was 1 percent.
He reminded that there had been an increase in corona cases in the past few days, but asserted there was no need to panic. The state of medical facilities had improved considerably. The number of beds reserved for corona patients was 20,000. There were 243 ICU beds available and 126 ventilators.
He disclosed that particular attention was being paid to contact tracing. As many as 6204 contacts of 1380 corona patients had been traced, whose health was being monitored. Their risk profile was being ascertained and appropriate action taken. At present, 1.30 lakh people were in quarantine, mostly at home.
He added there were 55 containment zones in the state where the necessary strictness was being adopted. Making comparisons, he said that the doubling rate from 25 to 31 May was 4.58 days, and the positive returns on tests were 8.83 percent. From 1 to 7 June, the doubling rate increased to 13 days, while the sample positive rate reduced to 6.16 percent. Between 25 and 31 May, as many as 970 tests were conducted and there were 8375 beds available. In contrast, from 1 to 7 June, 1053 tests were done and the beds increased to 18,234.
He asserted that strict action was being taken against those violating the rules. As many as 29737 people had been arrested and 7977 vehicles seized. Rs 3.35 crores had been exacted as penalties from violators. Guidelines have been issued for opening of hotels, shopping malls and religious places. They were expected to enforce physical distancing, sanitation, enforce use of mask, etc. He promised that further relaxations would be given if the people exhibited discipline and adhered to the rules.
He also disclosed that 21816 works were being conducted under MNREGA, providing employment to 3,07,451 workers. Also, 15,000 new job cards had been made, of which 11,000 had already been provided work.