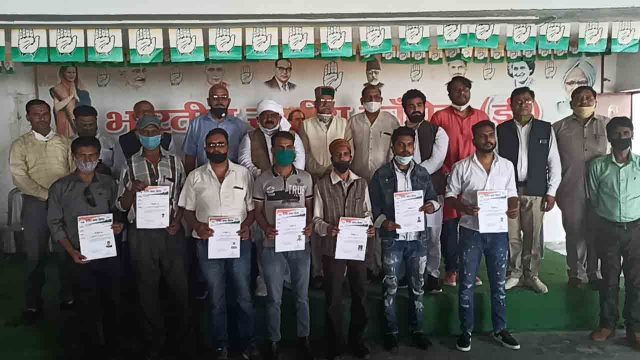 By Our Staff Reporter
Mussoorie, 4 Oct: Congress workers welcomed State President of the Uttarakhand Harish Rawat Brigade, Ajay Sharma, on his arrival, here, today.
On this occasion, a new executive of the Mussoorie unit of the Brigade was also formed. Ajay Sharma said that Congress workers needed to do concrete work at the booth level as that would ensure election victory. He called upon the workers to take the customary policies of the Congress to the people. He attacked the Trivendra Singh Rawat government, alleging that it was involved in corruption, indicated by the frequent change in decisions. The liquor and mining mafias were being protected.
The government had also failed completely to deal with the corona epidemic. He said that the BJP was inaugurating schemes earlier launched by the Congress government. He claimed that, in the coming days, the people would hand over the keys of power to the Congress.
Present on the occasion were former MLA Jot Singh Gunsola, Manmohan Singh Mall, Harish Rawat Brigade Mussoorie President DS Jonny, Gaurav Aggarwal, Vinod Semwal, Darshan Rawat and many others.

Garhwal Post has established itself as a credible, balanced and forward looking newspaper in India. Based in Uttarakhand, the daily is read by the aware, socially and culturally responsible, high-income elite of society.
Contact us: info@garhwalpost.in
https://garhwalpost.in/sexy-wife-date-night/