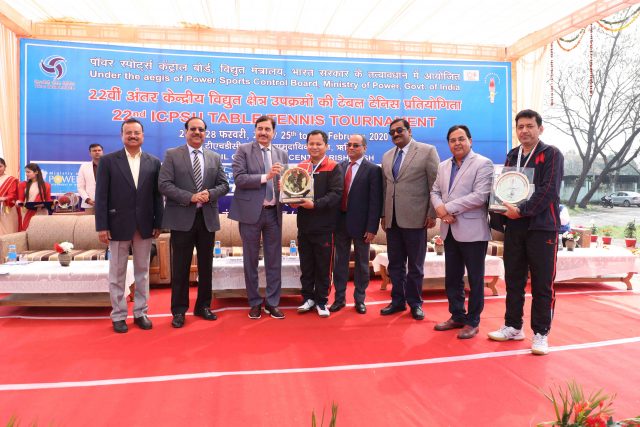 RISHIKESH, 28 Feb: THDCIL successfully organised the 22nd Inter Central Power Sector Undertakings (ICPSU) Table Tennis Tournament from 25 to 28 February, here, under the aegis of the Power Sports Control Board, Union Ministry of Power. The final match in the team event was played between PGCIL and BBMB. PGCIL was the winner. SJVNL secured the third place. In the doubles final match, Ronal Singh and J Mukherjee of PGCIL won the title against Gaurav Sahani and Naresh Kumar of BBMB. Navneet and Paramjeet of BBMB secured third place in the same event. The Singles Final was played between Ronal Singh and J Mujkherjee of PGCIL. Ronal won the title. The Chief Guest at the Closing Ceremony, DV Singh, CMD, THDCIL, gave away the prizes and medals to the winners. He expressed his gratitude to the teams and the organising committee. He congratulated the players for their outstanding performance at the 4 day Table Tennis Tournament. He emphasised the importance of Sports in bringing discipline and shaping an organisation. The event was attended by D(P) Vijay Goel, D(F) J Behera, CVO BP Gupta, ED (Services/ S&E) HL Bharaj and General Managers LP Joshi, GS Chaudhary and Kumar Sharad, AGM (P&A) NK Prasad and DGM(CC) Dr AN Tripathy and other Senior Officials and employees of the Corporation. AGM NK Prasad welcomed the Chief Guest, guests, senior officials and the players. He thanked the Chief Guest, Senior Officials of THDCIL, TT Association of Uttarakhand and Chief Referee & National Selector Prince Vipin, the participating teams and all the departments for making the event a grand success. A total of 10 teams from the Power Sector viz. Ministry of Power (MOP), POWERGRID, BBMB, DVC, CEA , PFC, SJVNL, NHPC, POSOCO and host team THDCIL participate in the tournament.