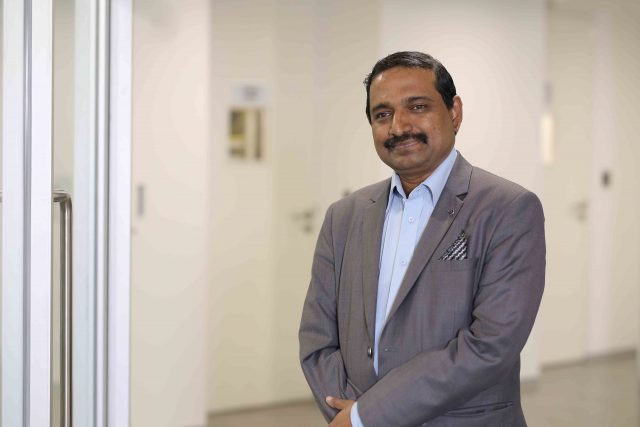 Dehradun, 4 Mar: University of Petroleum and Energy Studies has roped in veteran journalist and academician Prof KG Suresh as the Dean for the newly launched School of Modern Media effective from February 2020.
A former director general of IIMC, Prof Suresh will bring to UPES his strong vision for the field of education and his commitment to the media industry. The appointment is expected to reinforce the University’s commitment to imparting world-class education, under the leadership of talented and discerning academicians. Prof Suresh’s strong expertise in the field of media and administrative experience is important as UPES strives to create a holistic professional education ecosystem at its new School of Modern Media.
Prof Suresh comes with close to three decades of professional and personal experience in the leading institutions of higher education. He is a New Delhi based Senior Journalist, Columnist and Communication Strategist and was last associated with the Indian Institute of Mass Communication as its Director General. Prof Suresh has also served as Senior Consulting Editor with DD News, Editorial Consultant with Asianet News Network, Chief Political Correspondent with Press Trust of India and Group Media Advisor to Dalmia Bharat Enterprises.
Speaking about his new role, Prof Suresh said, “Media today is witnessing unprecedented and fast paced changes in terms of technology and content. It cannot anymore work in silos. In an era of integrated newsroom and convergence media, the industry would be looking for techno savvy, creative and articulate yet socially sensitive professionals and the School of Modern Media aims to meet this ever-growing requirement of the industry. Academia-Industry interface would be the USP of this school with state-of-the-art facilities and hands on training.”
A TEDx Speaker, KG Suresh was a Member of the prestigious feature film jury and non-fiction jury of Indian Panorama 2018 & 2017, respectively, for the International Film Festival of India. He was Editor-in-Chief and Member of the International Jury for the Media Colloquium at the prestigious Delhi Sustainable Development Summit-2015, and the only journalist to represent India at the World Media Conference in Seoul in March 2015. He has also been on the international jury for the Plural+ International Youth Video Festival 2012, organised by the United Nations Alliance of Civilisations and the International Organisation for Migration. He was the first Indian to be nominated as a jury since the inception of the festival in 2009.
Prof Suresh sits on the Academic Councils of India’s prestigious institutions like Jawaharlal Nehru University, New Delhi, Society of Satyajit Ray Film & Television Institute, Kolkata, Research Committee of Indian Council of Social Science Research, Advisory Council, The Delhi School of Journalism, University of Delhi; Academic Council, Central University of Himachal Pradesh and The School Board of Rabindranath Tagore, Tagore School of Creative Arts and Communication Studies, Assam University, Silchar. He is also a Member of the Awards Selection Committee of the National Council for Science and Technology Communication, Department of Science and Technology and he is an avid traveler having addressed key national and international conferences.
In the past, Prof Suresh has served as Designated Commonwealth Youth Ambassador for Peace by Commonwealth Youth Program, Asia. In December 2017, PRSI Leadership Award conferred on him the highest award for outstanding contribution to the Public Relations profession.
UPES’s School of Modern Media is offering undergraduate and post graduate programmes with courses ranging from Journalism and Mass Communication, Digital and Mass Media, Advertising and Digital Marketing and Events, PR and Corporate Communications. The program also offers specialisation in Photography and MBA in Media & Entertainment at the post graduate level.