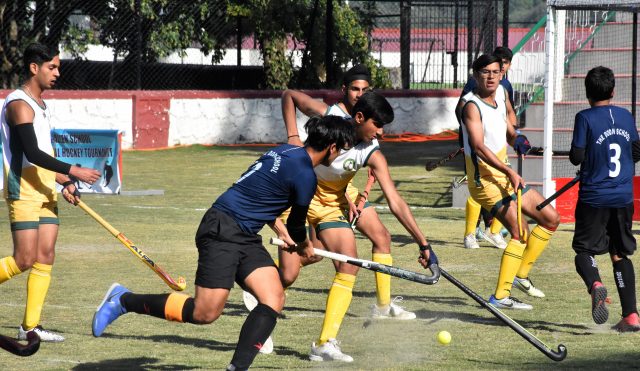 Mussoorie, 8 May: In an exciting final, today, Wynberg-Allen School defeated The Doon School by one goal to none to win the 7thDavid Inglis Memorial Hockey Tournament for the Year 2019.
The solitary goal of the match came in the first half when Hitesh scored for the host school side. Earlier, in the exciting semi-finals, Wynberg-Allen A defeated St Agnes Inter College, Dehradun, by a score of one goal to none in extra time (golden goal) in first tie. The Doon School defeated Welham Boys School, Dehradun, by a score of 5 goals to 4 in a penalty shootout in the second semi-final.
Wynberg-Allen organises the tournament every year in memory of David Inglis, a former teacher of the school who is known for his dedicated services.
Anant Kuriyal of The Doon School was awarded the Golden Stick Award for scoring the maximum number of goals in the tournament. The Best Goalkeeper Award went to Lobsang Tamding of Wynberg Allen. The Player of the Tournament Award was given to Chaitnya Singh of Wynberg-Allen.
Nitesh of St Agnes’ Inter Collage, Shubh Parekit of St George’s College, Samar Kumar of the The Doon School, Ritik Dubey of the Oak Grove School, Vatsal of Welham Boys, Arpit Rana and Bhavyadeep of Wynberg Allen School were declared the Most Promising Players of the Tournament.
Headmaster P Radcliffe awarded the trophies and mementoes to the winners. Principal L Tindale thanked all the officials, especially Vinod Badola, Amit Kataria, Nitin Joshi and the organising committee comprising Mr Champa, Coach Bodosa Mochahary, Jagmohan Negi, Ajit Kumar, Manju Hatwal, Choying Bhutia and Tashi Tsering for successfully holding the tournament.

Garhwal Post has established itself as a credible, balanced and forward looking newspaper in India. Based in Uttarakhand, the daily is read by the aware, socially and culturally responsible, high-income elite of society.
Contact us: info@garhwalpost.in
local dating agency