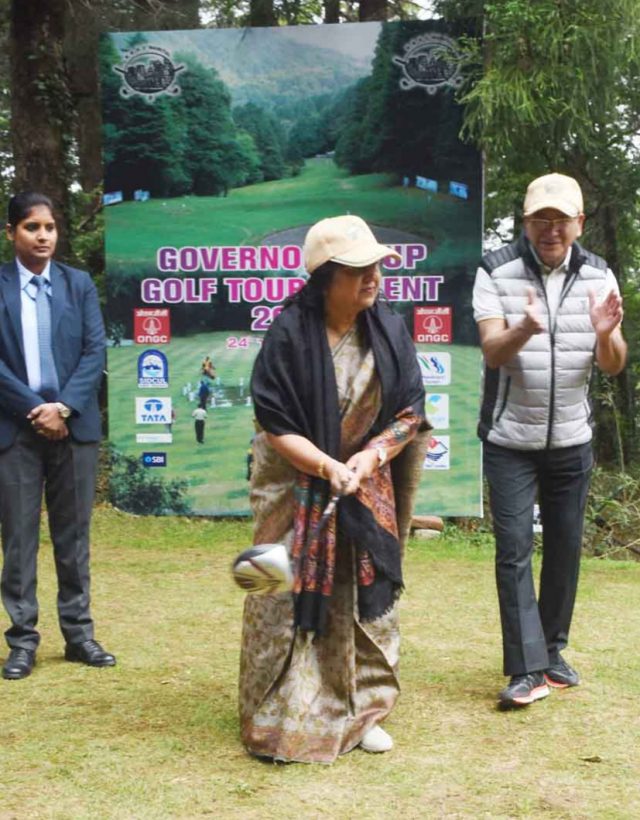 By OUR STAFF REPORTER
Nainital 24 May: Governor Baby Rani Maurya inaugurated the 17th “Governor’s Cup Golf Tournament- 2019” organised by Golf Club, Nainital, at the Raj Bhawan, here, on Friday. The Governor took the tee off shot to inaugurate this three day tournament, which will end on Sunday.
Governor Maurya said it was a matter of happiness that a large number of players were interested in the Golf Competition. This year, 126 players registered themselves for the tournament.
The Indian Golf Association and Uttarakhand Golf are working together to promote the sport. Golf is helping to promote tourism in the District and the State. The tournament would help establish the identity of Uttarakhand as a Special Tourist Spot at the national and international level.
An Inter-School Tournament has also been organised for students to promote golf.
A cultural evening will also be held on Saturday at Raj Bhawan to showcase the rich cultural heritage of Uttarakhand
Winners of this competition will also be awarded on 26 May. After the Governor’s Cup, a Junior, Sub-Junior National Competition will be hosted by the Raj Bhawan Golf Course.
Ramesh Kumar Sudhanshu, Secretary to the Governor, ADC Dr Aseem Shrivastva (P), ADC Rachita Juyal, Golf Captain Col Harish Shah, Senior Physician Dr AK Singh, Deputy Director, Information, Nitin Upadhyay, golfers and representatives of the sponsors were among those present on the occasion.

Garhwal Post has established itself as a credible, balanced and forward looking newspaper in India. Based in Uttarakhand, the daily is read by the aware, socially and culturally responsible, high-income elite of society.
Contact us: info@garhwalpost.in
hotel hook up app dating sites donegal https://garhwalpost.in/where-do-singles-meet-near-me/