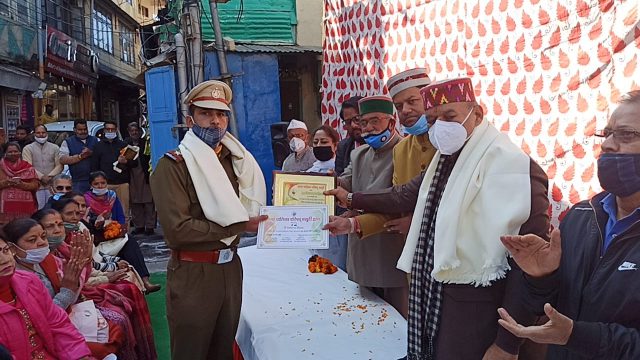 By Our Staff Reporter
Mussoorie, 28 Jan: The 72nd Republic Day was celebrated with pomp in Mussoorie at government and non-government offices. The Tricolour was unfurled by Chief Guest MLA Ganesh Joshi at a public function organised at Landour Chowk. On this occasion, people doing excellent work in various fields were felicitated. MLA Joshi said that, if people become aware of their duties, the country would move forward on the path of development. He appealed for cooperation in maintaining the cleanliness of the city.
While presiding, Municipal Chairman Anuj Gupta said that continuous work is being done on the development of the Mussoorie region. He said that, under a special plan, an effort was being made to keep Mussoorie clean so that it can become a dustbin free city.
The programme was conducted by BJP General Secretary Kushal Rana. On this occasion, students of Sanatan Dharma Girls Inter College sang the national anthem.
On the occasion, social activist Pankaj Aggarwal accused the people’s representatives of neglecting the oldest market in Mussoorie. He said that, once a year, on the occasion of Republic Day, politicians and public representatives of Mussoorie gather together and talk extensively about the development of the city, but no one has been able to develop Landour Bazaar from the point of view of tourism.
MLA Joshi said that, for the development of Landour Market, suggestions of the local people would be taken so that it could be connected to the main market in the future.
Those felicitated on the occasion were Anmol Jain, Sunil Silwal in the field of journalism; Kamod Sharma, Principal, in the field of education; environment friends Mohan, Suresh Goyal; Semul Chandra in the field of sports; Driver, Nirankari Mandal, Balkishan; Social Activist Narendra Sahni; Yash Gupta, Suresh Singh, Rahul Chhabra, Anil, Sangeeta Bhandari, ITBP Officer GD Motiram Jat.
Among those present were Mussoorie Congress president Gaurav Aggarwal, Mahila Congress President Jasbir Kaur, former Palika Chairman OP Uniyal, Amit Bhatt, Megh Singh Kandari, Arvind Sonkar, Mussoorie BJP Mandal Vice President Gambhir Panwar, Amit Bhatt, Mahila Morcha President Pushpa Padiyar, Anita Saxena, Anita Pundir, Narendra Anand, Ashish Joshi, Dharampal Panwar and others.