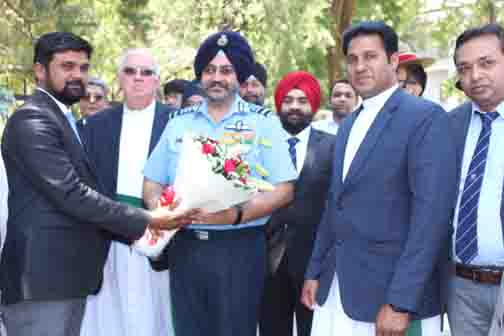 By Sunil Sonker
Mussoorie, 7 May: Chief of Air Staff, Air Chief Marshal Birender Singh Dhanoa visited St George’s College on Tuesday. Accompanying him were other distinguished guests like Lt General Anil Kumar Bhatt, former DGP, Punjab, Paramdeep Singh Gill and Anuj Gupta, Chairman, City Board, Mussoorie.
The programme arranged in honour of this visit began with a Prayer and Welcome Song followed by the lighting of the ceremonial lamp by the Chief Guest and other distinguished visitors. The power point presentation based on the accomplishments of the Air Chief Marshal was much appreciated by the visitors. A vibrantly colourful folk dance was presented by the students of Nirmala Inter College. This was followed by a soulful rendition by the School Orchestra. The Dance troupe of St George’s brought patriotic fervor to the forefront by presenting a dance dedicated to the Pulwama martyrs.
Addressing the gathering, Air Chief Marshal Birender Singh Dhanoa congratulated the students for their achievements in the field of academic studies and co-curricular activities. He said that they were lucky to be at St George’s and urged them to consider the Air Force as a career. The Air Chief said that he has come to his school after 50 years, from where he had received his initial education and he was very happy that his teacher at that time, Bro Carroll still was in the school. He also shared his memories with the students and staff of the college.
Air Chief Marshal Dhanoa said that the school has made a lot of progress in 50 years and today it was touching new dimensions. The same college had given many important people who are now serving different organisations and illuminating the name of the country. He said that all the students should work harder to build their future and always dream to do something in their life. On this occasion, he gave many examples to motivate the students.  He said that children should choose any profession in their life, but they should set the goals to achieve it. He told the children to never lie in life and to always follow the path of truth. He said that whatever he was today was because of his father who inspired him to join the Air Force.
Lt Gen Anil Kumar Bhatt said that the Chief of the Indian Air Force gave an answer to the enemy nation in Balakot for which the whole nation was proud of them. He said that the college has given many important people who were working in various professions and serving the country for its development.
Principal Bro Tomy Varghese expressed his gratitude and heartfelt appreciation to Air Chief Marshal Birender Singh Dhanoa. Mementos were presented to each of the dignitaries. The programme ended with the Vote of Thanks followed by the school song.

Garhwal Post has established itself as a credible, balanced and forward looking newspaper in India. Based in Uttarakhand, the daily is read by the aware, socially and culturally responsible, high-income elite of society.
Contact us: info@garhwalpost.in
https://garhwalpost.in/browse-local-singles-without-signing-up/ dating southall