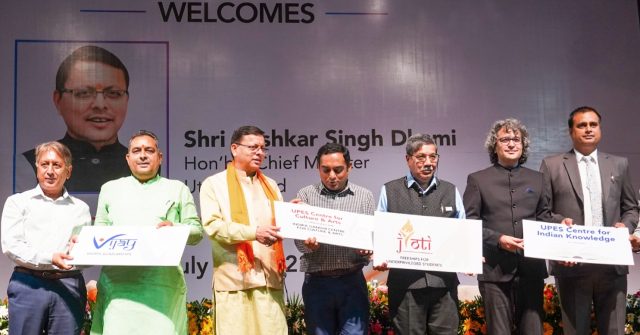 DEHRADUN, 13 Jul: Chief Minister Pushkar Singh Dhami today asserted that the BJP Government had made Gairsain the summer capital and it was fully committed to its development. Dhami was responding to queries of the media persons during an interaction with the media at a function organised at University of Petroleum & Energy Studies (UPES) here today.

Dhami asserted that in the recently sanctioned budget, the government had made a provision of Rs 22 crore for Gairsain.

The media persons had asked questions in this respect which had been raised recently by veteran Congress leader and former Chief Minister Harish Rawat. It may be recalled that Pic: Bhumesh Bharti Harish Rawat had claimed that the budget of the Dhami government was disappointing and said that that there was no significant budget provision for Gairsain and that it was the betrayal of the people’s feelings.

Harish Rawat had also criticised the government for holding the budget session of the assembly in Dehradun.

The CM also said that financial problems would not come in the way of meritorious students of the weaker sections of the state. CM launched ‘Jyoti Scholarship’ for such children and ‘Vijay Scholarship’ to promote talented sportspersons. The Chief Minister said that the scholarship launched by UPES for the meritorious and talented sportspersons was a commendable step. During this, the Chief Minister said that the National Education Policy2020 had been introduced in the country to bring revolutionary changes in education.

Dhami launched the Centre for Culture and Art and the Centre for Indian Knowledge at the varsity which had been set up with the aim of promoting, preserving and studying the folk culture and traditions of Uttarakhand besides passing on the ancient Indian knowledge to the new generation. Earlier, the Chief Minister also inaugurated ‘Jyoti Scholarship’ and ‘Vijay’ scholarship.

Chief Minister Pushkar Singh Dhami said that the arrival of big institutions and universities in any region not only enhanced the life of the students studying in them, but also changed the lives of the people of the surrounding area. The livelihood resources of the people at the local level also tended to increase. He called upon the university to pay attention to contribute towards development in the remote and rural areas of Uttarakhand.

DEHRADUN, 13 Jul: University of Petroleum & Energy Studies (UPES), a leading multi-disciplinary university in Dehradun today announced new sports scholarships and freeships for the academic year 2022-23. The new scholarships and freeships are intended to make quality education and career pathways accessible to meritorious deserving individuals. The announcement of 50 sports scholarships under Project Vijaya and 50 freeships for underprivileged students under Project Jyoti was made at an event held in the university campus in the presence of Chief Minister Pushkar Singh Dhami and local MLA Sahdev Singh Pundir.

Commenting on the new scholarships, Dr Sunil Rai, Vice Chancellor, UPES said, “As a University of Tomorrow we stand on six strong pillars, one of which is ‘Purpose’. Driving the purpose of education for all, UPES has added these two new scholarships to the existing ones. We provide a range of scholarships based on merit, for girl students, to the underprivileged, to sports people and more because we believe that every student is competent and deserves access to quality education and financial worries should not stop them from chasing their dreams. It is a privilege for us to announce Project Vijaya and Project Jyoti in the presence of the Hon’ble Chief Minister of Uttarakhand”.

“I would like to congratulate the Uttarakhand government for completing 100 days and initiating visionary plans that will bring immense prosperity to the state”.

Project Vijaya-UPES Sports Scholarships: Taking the lead in making ‘sports’ an inclusive part of the academic curriculum and to develop a sports culture within the university, UPES has introduced scholarships for talented sports people. There will be a total of 50 seats allotted for the following sports- Cricket, Football, Athletics, Basketball, Volleyball, Table Tennis, Badminton, Shooting and Chess. Applicable only on the tuition fee, the scholarship will range from 35% to 100% depending on the number of achievements and the national and international sports representation by the candidate. Apart from the academic eligibility, the scholarship is applicable if the student continues the sport as part of the UPES team.

Project Jyoti- UPES Freeships: Providing an opportunity to students from economically weaker sections of the society to continue with their higher education, UPES has launched freeships. The scholarship will be provided on both the tuition fee and hostel fee. There will be total of 50 freeships in various UG and PG programs. Besides the sports scholarships and freeships, UPES also offers 100% merit scholarship, 50% of which is reserved for female students, 33% Domicile Scholarship to students who are residents of Uttarakhand and Digital Innovation Scholarship funded by Meta to select students on all the undergraduate programs of School of Modern Media.

Garhwal Post has established itself as a credible, balanced and forward looking newspaper in India. Based in Uttarakhand, the daily is read by the aware, socially and culturally responsible, high-income elite of society.
Contact us: info@garhwalpost.in
https://garhwalpost.in/top-dating-apps-toronto/ bwwm relationships blogs