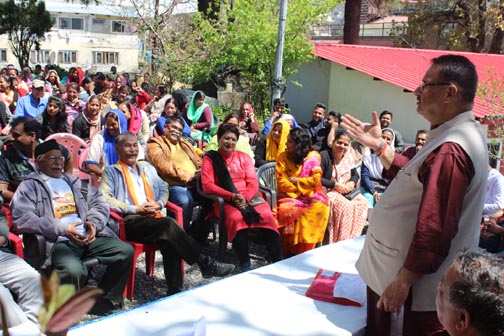 By OUR STAFF REPORTER
Mussoorie, 31 Mar: In Mussoorie, a BJP booth level committee meeting was organised under the leadership of Tehri Lok Sabha in-charge Kailash Pant and Mussoorie MLA Ganesh Joshi. Instructions were issued to workers to complete their homework regarding the booths of Mussoorie constituency and also to publicise the work done by the BJP state and union governments.
During the meeting, BJP leaders extolled the development work and achievements of Prime Minister Narendra Modi, Chief Minister Trivendra Singh Rawat and Mussoorie MLA Ganesh Joshi with Rajya Sabha MP Anil Baloni. It was claimed that many projects related to Mussoorie and nearby had been sanctioned due to their support and initiative. On the occasion, many Congress workers joined the BJP and were accorded a warm welcome. It was claimed this was taking place as people were pleased with the working of the BJP government and PM Narendra Modi. They said that the Bharatiya Janata Party talked about nationalism while the other parties and Congress favoured dynasties.
BJP leader Kailash Pant, Mussoorie in-charge Niranjan Dobhal and MLA Ganesh Joshi said that important works had been done in the field of development in the past 5 years by Prime Minister Narendra Modi due to which the country was moving forward. People wanted to see Narendra Modi as the prime minister of the country, once again. They expressed confidence that with the support of the people, Narendra Modi would again become the Prime Minister with a full majority. The NDA would win more than 400 seats in the Lok Sabha.
Among those present on the occasion included Mussoorie BJP President Mohan Petwal, Women’s Morcha President Mira Suriyal, former municipal President OP Uniyal, Yuva Morcha President Rakesh Rawat, Kushal Rana, DP Panwar, Ravindra Rawat and Anil Singh.

Garhwal Post has established itself as a credible, balanced and forward looking newspaper in India. Based in Uttarakhand, the daily is read by the aware, socially and culturally responsible, high-income elite of society.
Contact us: info@garhwalpost.in
canada's dating coach