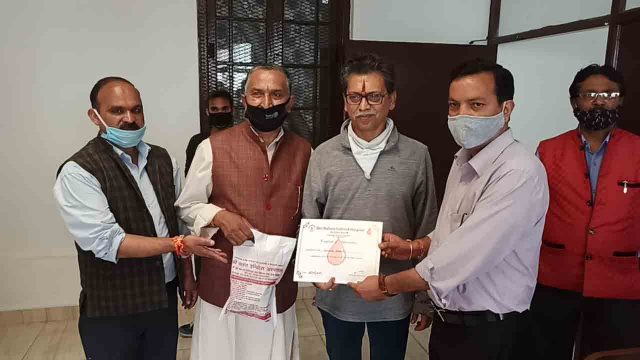 By OUR STAFF REPORTER
MUSSOORIE, 18 Sep: As part of Seva Saptah, being held as part of Prime Minister Narendra Modi’s birthday celebrations, BJYM workers organised a blood donation camp led by BJP Yuva Morcha, Mussoorie, President Rakesh Rawat, here, on Friday. The camp was organised in the auditorium of the Tilak Memorial Library and was inaugurated by Neha Joshi, national co-spokesperson of BJP Yuva Morcha.
As many as 60 units of blood were donated at the camp. Rakesh Rawat said that the Yuva Morcha had organised a blood donation camp for the third time in the last one month, which was attended by a large number of donors. Mahant Indresh Hospital had provided special support for the camp.
Neha Joshi, while praising the work being done by the Mussoorie Yuva Morcha, said that due to the acute shortage of blood in the Doon Blood Bank, accident victims, pregnant women and people suffering from corona infection were forced to suffer. BJP Yuva Morcha and BJP workers, with the collaboration of the people, are serving people by donating blood. She called on all people to help each other in this hour of trouble.
Present on this occasion were BJP Mussoorie President Mohan Petwal, Kushal Rana, Gambhir Panwar, Naresh Anand, Cantonment Vice President Badal Prakash, Manoj Kharola, Indresh Hospital Blood Coordinator Amit, Narendra Melwan, Sapna Sharma, Abhilash, Anil, Kunal, Ramesh Khanduri, Rakesh Aggarwal. Ajay Sodiyal and many others.