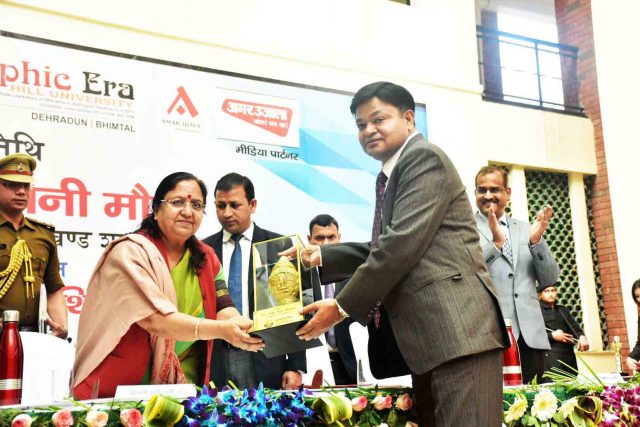 DEHRADUN, 25 Feb: Governer Baby Rani Maurya said today that the one who donates blood is like a soldier who protects the nation. The Governor inaugurated a blood donation camp at Graphic Era University, here, today. On the first day of the blood camp, as many as 1354 units of blood were donated by the students and faculty, which were provided to the local blood banks. The Governor said that, apart from being a place of pilgrimage, Uttarakhand was the home of the brave. The people of Uttarakhand protected the nation as brave soldiers. According to WHO figures, India requires 1.35 crore units of blood. Most of pregnant women who die during pregnancy were anemic. The need of the day was to make Blood Donation a major campaign. Governor said it was important to motivate the people for blood donation. She pointed out that, today, online groups on social media and mobile phones were spreading awareness on blood donation. The Governor thanked Graphic Era for organising such blood donation campaigns and providing the campus and involving students in the task. Prof Dr Kamal Ghanshala, President, Graphic Era Group, said that the University organises two blood donation camps every year. Till now, 25000 units of blood had been donated to the state’s various blood banks. Dr Ghanshala added that along with high quality education and excellent placement of students in various national and international MNCs, Graphic Era groomed them as socially responsible citizens. Such blood donation camps were a part of this effort. On the first day of the two day blood donation camp, IMA Blood Bank collected 350 units, Mahant Indresh Hospital, 502 units, Himalayan Hospital Jolly Grant, 300 units, Doon Hospital, 101 units and AIIMS, Rishikesh, 101 units of blood. There were serpentine queues outside the 5 donation centres established in the premises of Graphic Era Deemed to be University and Graphic Era Hill University. Dr Amal Joshi from Graphic Era Deemed to be University was felicitated by Governor for donating blood for the 51st time today. Dr Azhar Ahmad donated blood for the 39th time, Anil Chauhan for the 31st time, Raj Kamal Joshi for the 27th time, Dr Sanjeev Kumar for the 20th time, Sahib Sablok for the 18th time, Nilesh Joshi for the 10th time and Akhil Negi for the 21st time. Dr Manish Kumar Leela from Graphic Era Hill University donated blood for the 26th time, Aditya Harbola, for the 20th time, Kuljinder Singh Bumbra for the 15th time and Dr Rahul Raj for the 6th time.

Garhwal Post has established itself as a credible, balanced and forward looking newspaper in India. Based in Uttarakhand, the daily is read by the aware, socially and culturally responsible, high-income elite of society.
Contact us: info@garhwalpost.in
transsexual hookup