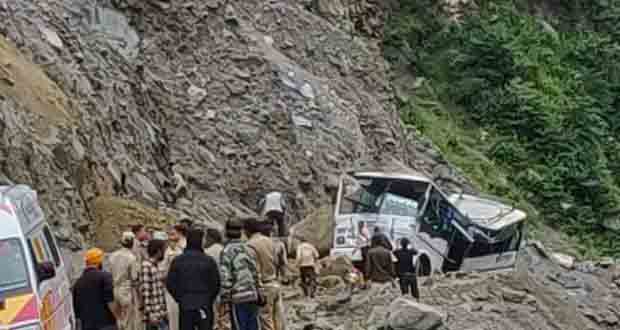 Dehradun, 6 Aug: Boulders fell on a bus near Lambagad on the Badrinath Highway, leading to the death of seven passengers, according to early reports. Seven others have been injured. The incident took place at 9 a.m., today.
Personnel of the SDRF, Police, the administration and local people undertook rescue operations. All the passengers are reported to be from Mumbai.
According to official sources, the seven injured passengers have been admitted to hospital. A JCB driver, who had come to clear debris from on top of the bus, also suffered injuries.
The bus carrying pilgrims was returning from Badrinath. Boulders began to fall down hill on the highway near Lambagad and the bus was buried under them. The rescue team extracted the passengers from the bus after considerable effort.

Garhwal Post has established itself as a credible, balanced and forward looking newspaper in India. Based in Uttarakhand, the daily is read by the aware, socially and culturally responsible, high-income elite of society.
Contact us: info@garhwalpost.in
bi guys dating apps https://garhwalpost.in/hilarious-dating-profile-headlines/ dating daddy part2