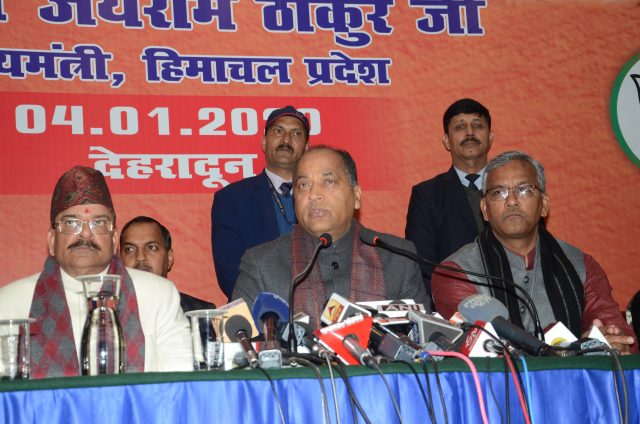 DEHRADUN, 4 Jan:  The Citizenship (Amendment)  Act, 2019 passed by the Union Government recently  was only intended to help minority communities facing religious persecution in the three neighbouring countries and would not take away anyone’s citizenship and was in no way against any community or sect. This was stated by the Chief Minister Jai Ram Thakur while addressing the Press Conference at Dehradun in Uttarakhand today. Chief Minister said that an agreement was signed between Jawaharlal Nehru and Liaquat Ali to protect the minority communities of the respective countries. He said that India abides by this Pact but in Pakistan, the condition of minority was pathetic. He said that since, the Constitutions of Pakistan, Afghanistan and Bangladesh provided for a specific state religion, many persons belonging to Hindu, Sikh, Buddhist, Jain, Parsi and Christian communities have faced persecution on grounds of religion in those countries. He said that this resulted into continuous large scale migration of minorities from Pakistan, Bangladesh and Afghanistan.  Jai Ram Thakur said that the Congress and other opposition leaders were trying to politicise the whole issue to misled the people by spreading false canard. He said that the Act has nothing against the minority communities already living in India as they were already citizens of this great nation. He said that Act is only for the migrants from Hindu, Sikh, Buddhist, Jain, Parsi or Christian communities from Afghanistan, Pakistan or Bangladesh who has fled these countries due to atrocities there. He said that the Act seeks to grant immunity to the migrants of the aforesaid Hindu, Sikh, Buddhist, Jain, Parsi and Christian communities so that any proceeding against them regarding their status of migration or citizenship does not bar them from applying for Indian citizenship. Chief Minister said that the incident of Sri Nankana Sahib was a glaring example of atrocities against the minority communities in Pakistan. He said that the Act was an attempt to provide relief to these minorities belonging to Hindu, Sikh Buddhist, Jain, Parsi and Christian communities. He said that the Congress leaders were trying to make mountain out of mole as they have no issue and want to divert the attention of the people from core issue of development. He said that every minority in this country are free, secure and independent to practice the religion of their choice. He said that during the last five years itself as many as 566 Muslims from Pakistan, Bangladesh and Afghanistan were granted Indian citizenship.  Jai Ram Thakur said that many persons of Indian origin including persons belonging to the said minority communities from these countries have been applying for citizenship under section 5 of the Citizenship Act, 1955 but they are unable to produce proof of their Indian origin. Hence, they are forced to apply for citizenship by naturalisation under section 6 of the said Act. He said that the Third Schedule of the Act make applicants belonging to the said communities from the aforesaid countries eligible for citizenship by naturalisation if they can establish their residency in India for five years instead of the existing eleven years. Chief Minister said that opposition leaders were making un-necessary hue and cry over this Act in a desperate attempt to divert the attention of the people from core issues of development. He said that the Act was no way against any citizen of the country belonging to any religion or sect. He said that the opposition were trying to intimidate the minorities of India by misleading them by terming this Act as anti minorities. Jai Ram Thakur said that the country today was safe and secure under the able and dynamic leadership of Prime Minister Narendra Modi and was poised to emerge as the world power in the comity of the Nations. He said that the people of the State gave massive mandate to the State Government in the Lok Sabha and thereafter in the bye elections. He said that the India has regained its old glory under the able leadership of Prime Minister Narendra Modi. He said that even the leaders of most powerful nations of the world have now acknowledged the strong leadership of Narendra Modi. He said that abrogation of Article 370 was possible due to the strong political will power and today India is one nation with one Constitution and one flag. He said that similarly, the decision regarding Triple Talaq was also a historic one which have ensured empowerment of Muslim women’s and check their exploitation. Chief Minister of Uttarakhand T.S. Rawat, BJP President Uttarakhand and Member of Parliament Ajay Bhatt, Vice Chairman State Civil Supplies Corporation Baldev Tomar, Political Advisor to Chief Minister Trilok Jamwal, OSD Shishu Dharma, were present on the occasion among others.