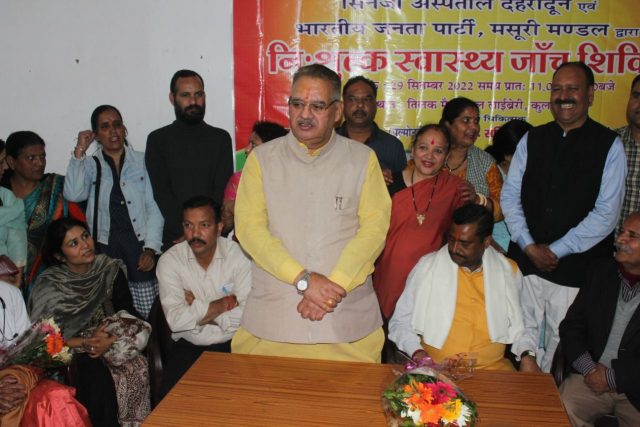 Mussoorie, 30 Sep: As part of the ongoing birthday celebrations of Prime Minister Narendra Modi, a free health check-up camp was organised by Synergy Hospital, Dehradun, and Bharatiya Janata Party, Mussoorie, in the auditorium of Tilak Memorial Library at Picture Palace.

Cabinet Minister Joshi said that, under the Seva Pakhwara being held from 17 September to 2 October, various types of service programmes are being organised across the country as well as across the state. He prayed for the long life and health of Prime Minister Narendra Modi.

Joshi claimed that, within eight years, Prime Minister Narendra Modi has taken the country to greater heights. India is now the 5th largest economy in the world and the fourth largest military power. Make in India is being strengthened, and the condition of farmers, women and youth improved. He also added that, under the leadership of Chief Minister Pushkar Singh Dhami, the state government has taken a pledge that when Uttarakhand turns 25, it would be the leading state in the country.

He emphasised that, in the recruitment scam case, the government has sent 45 people to jail, while the Ankita Bhandari murder case is being investigated by an SIT under the supervision of a DIG rank officer. The main accused in the case has been arrested and sent to jail. His family members have been removed from party posts, while the Patwari concerned has been suspended. He asserted that the Dhami Government stands with the family of Ankita Bhandari.

Garhwal Post has established itself as a credible, balanced and forward looking newspaper in India. Based in Uttarakhand, the daily is read by the aware, socially and culturally responsible, high-income elite of society.
Contact us: info@garhwalpost.in
elite dating https://garhwalpost.in/best-churches-for-singles-near-me/