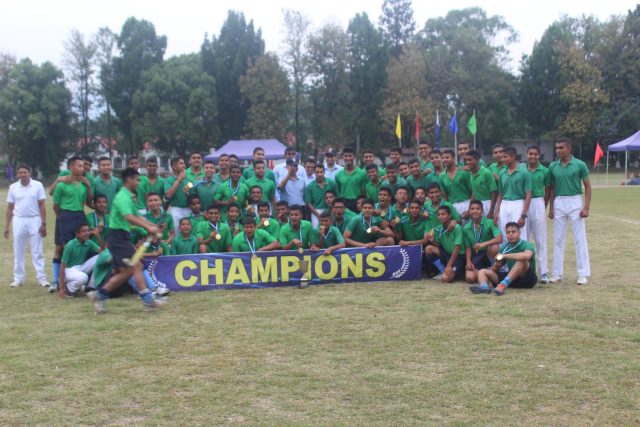 Dehradun, 3 Apr: The RIMC Inter Section Hockey Competition started on 26 April and culminated on 2 May with the matches being contested in two categories from each section, that is senior and juniors. The prestigious trophy was held by Pratap Section, which was snatched with a clean sweep by Chandragupta Section in both the categories.
In the juniors’ category, the second position was bagged by the team of Shivaji Section and the First Position was claimed by the team of Chandragupta Section.
Cadet Tejas Narwade was adjudged the Best Player in the juniors’ category and the Best Goalkeeper was Cadet Rubin Singh.
In the seniors’ category, the team of Shivaji Section landed second and Chandragupta Section outsmarted it to clinch the Gold Medal. The Best Player Award was bestowed upon Cadet Rupam Manna and the Best Goalkeeper was Cadet Aman Mishra. The Most Upcoming Player was Cadet Ayushdhar.
In the overall standings, Ranjit Section trailed at fourth place, third was Pratap Section, Shivaji was second and Chandragupta Section won the Trophy.
Chief Guest Col Vivek Sharma, Commandant, RIMC, gave away the awards and trophy to the cadets. Col Vivek Sharma hailed the cadets for their exceptional zeal for the game and also advised them to be consistent and grounded after victory.

Garhwal Post has established itself as a credible, balanced and forward looking newspaper in India. Based in Uttarakhand, the daily is read by the aware, socially and culturally responsible, high-income elite of society.
Contact us: info@garhwalpost.in
https://garhwalpost.in/dating-app-std/ online match making https://garhwalpost.in/best-dating-sites-for-polyamory/