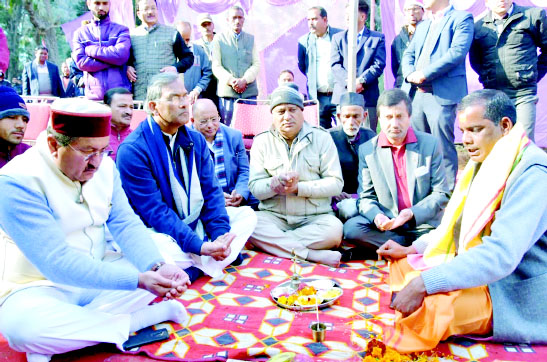 By OUR STAFF REPORTER
DEHRADUN, 18 Jan: Chief Minister Trivendra Singh Rawat held a review meeting with District Level Officers in the Rudraprayag District Office Auditorium. At the meeting, it was stated by the Department of Agriculture that 71.64 hectares of infertile land with the 17 model villages in the district was being transformed into fertile land. Under the same model villages, work on plantation of peas on 10 hectares, Broccoli on 1 hectare, cabbage on 5 hectares was being done by the Horticulture Department.
The Chief Minister stressed on the cultivation of flowers, making branded Puja Samagri in the district, and working on cluster farming. He also talked about providing boxes at a subsidy of 60 per cent and colonies to farmers, who have been working on bee keeping in the district. Prior to this, 40 per cent subsidy was being given by the government for bee keeping. Details of project goals, e-learning, test series, offline classes, etc. were given in detail by the Department of Education.
Before this, the Chief Minister inspected the under construction Sainik Vidyalaya in Digdhar Badma and performed the Bhoomi Pujan and foundation stone laying of the new building of the BJP office near the Rudraksh Wedding Point.
Cabinet Minister Prakash Pant, MLA, Rudraprayag, Bharat Singh Chaudhary, District President Vijay Karpwan, District Incharge, BJP, Pandit Rajendra Anthwal, Industrial Advisor to Chief Minister KS Panwar, District Magistrate, Rudraprayag, Mangesh Ghildiyal, SP Ajai Singh and District level officers were present on the occasion.

Garhwal Post has established itself as a credible, balanced and forward looking newspaper in India. Based in Uttarakhand, the daily is read by the aware, socially and culturally responsible, high-income elite of society.
Contact us: info@garhwalpost.in
top asian dating sites https://garhwalpost.in/transsexual-hookup/ https://garhwalpost.in/gay-black-hook-ups/