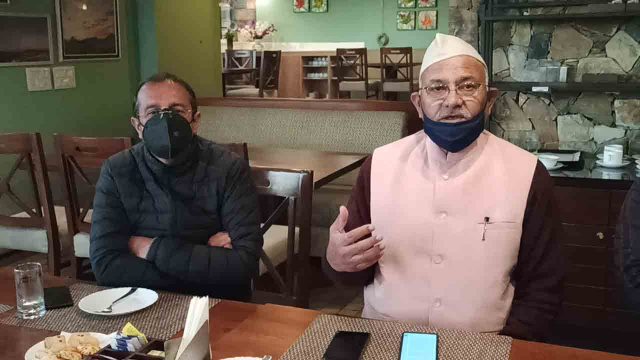 By Our Staff Reporter
Mussoorie, 17 Dec: Uttarakhand Congress State Vice President Jot Singh Bisht attacked the Central Government at a press conference here, today, and strongly condemned the BJP for ‘stopping’ Rahul Gandhi from speaking at the National Security Committee meeting.
He said that under the rule of the BJP government at the centre, China and Pakistan were occupying Indian Territory. Donations had been taken from China and Pakistan for the PM CARES Fund, which was neither in the interest of the soldiers nor in the interest of the farmers. Due to wrong decisions of the government, young people were dying on the borders and farmers were dying inside the country. Former Prime Minister Lal Bahadur Shastri had given the slogan, ‘Jai Jawan, Jai Kisan’, but Narendra Modi gave the slogan ‘Mar Kisan, Mar Jawan’. The dictatorial government, which passed three black laws on the basis of a majority, was hurting the interests of the farmers of the country.
He said that farmers are agitating in different areas of the country for withdrawal of the anti-farmer laws, but the central government was not paying any attention. He said that, with these laws, the Mandi system in the country would end. Farmers would not be able to get minimum support price for their crops. In order to protect the interests of the farmers, Rahul Gandhi had waived the loans of farmers in Madhya Pradesh, Chhattisgarh and Rajasthan. Under the leadership of Rahul Gandhi, the Congress would always support the farmers. He said that, along with exposing the black exploits of the Modi Government, the Congress constantly brought before the public, the anti-development face of the Trivendra Singh Rawat Government. The people of the state would oust the BJP government from power in 2022.
Present on the occasion were Sandeep Sahni, Mukesh and others.

Garhwal Post has established itself as a credible, balanced and forward looking newspaper in India. Based in Uttarakhand, the daily is read by the aware, socially and culturally responsible, high-income elite of society.
Contact us: info@garhwalpost.in
https://garhwalpost.in/ukraine-date/