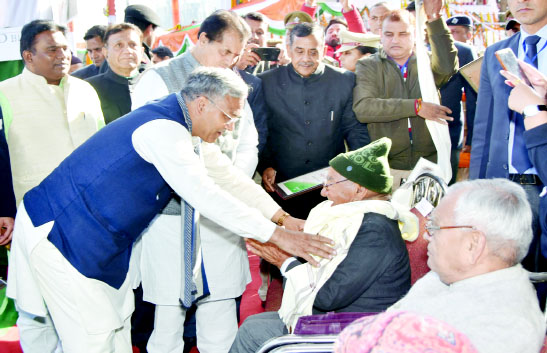 By OUR STAFF REPORTER
Dehradun, 27 Jan: On the occasion of the 70th Republic Day, Chief Minister Trivendra Singh Rawat hoisted the national flag at his official residence. He administered the oath of national unity and mutual harmony to the officers, employees and police personnel present on the occasion. He extended Republic Day greetings to the people of the state and paid tribute to the Constitution makers and freedom fighters.
He also conferred an award of appreciation to Colonel Ved Vrat Vaidya of 127 Infantry Battalion, Garhwal Rifles, and presented a bouquet to Sub-Inspector Prakash Chandra Sharma, posted in the CM’s Security, on his selection for the President’s Police Medal for his meritorious services.
The Chief Minister remembered the lawmakers, who framed the Constitution of India and created a republican system. He said that the Constitution of India was counted among the best constitutions of the world. The Constitution was flexible and according to the time and circumstances, it had been suitably amended. He said that pursuing the spirit with which India’s Constitution was made, all had to take forward the country and society on the basis of inclusiveness.
He congratulated Mountaineer Bachendri Pal on being awarded the Padma Bhushan. He also congratulated Jagar Samrat Pritam Bartwan and Photographer Anup Sah on being selected for the Padma Shri. While congratulating former President Pranab Mukherjee on being selected for the Bharat Ratna, Chief Minister said that, besides being an able politician, he had also been an excellent administrator. He also paid tribute to Nanaji Deshmukh and Bhupen Hazarika on being selected posthumously for the Bharat Ratna.
The Chief Minister, Trivendra Singh Rawat, and BJP State President Ajay Bhatt also hoisted the national flag at the BJP office on Balbir Road. Thereafter, the Chief Minister joined the state level programme held at the Parade Ground. He met the veteran freedom fighters present in the programme and presented shawls t them. He also viewed the exhibition organised by the Information Department.