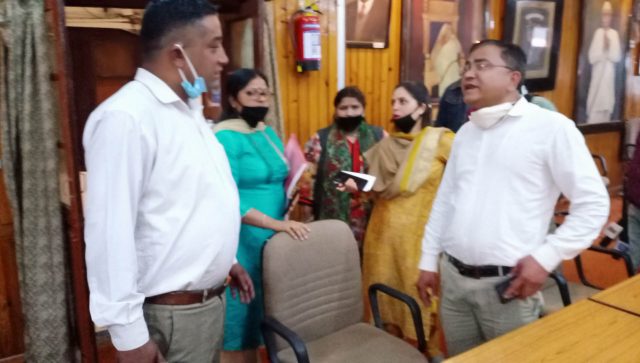 MUSSOORIE, 3 Jul: A meeting of the Mussoorie Municipality Board was adjourned here, today, for lack of quorum.
After this, there was a fierce commotion in the auditorium of the municipality by eight members. They said they had arrived on time but not accepted as present. They alleged the board meeting was adjourned by the chairman because there were many questions to be asked about the irregularities being committed by the municipality. According to them, many works had been done by the municipality in the past, which had not been approved by the board.
Municipal Chairman Anuj Gupta also avoided the questions of the media. After adjourning the board meeting, he made good his departure. The media tried to contact him, but he could not be contacted to get his response till such time this news was written.
The members said that the chairman was violating the rules to benefit those close to him. Complaints had been sent even to the Chief Minister in this regard.
A 4 member team under the leadership of SDM Mussoorie is investigating the alleged irregularities. The members said that in the past, too, a meeting was held several times, during which many of the councilors could not arrive in time, but was not adjourned. They reminded that at such meetings, the members voiced the feelings of the public regarding the development of the area. But due to the stubborn attitude of Chairman Anuj Gupta, the board meeting could not be held for the last 6 months.
Councilor Pratap Panwar said that due to the discriminatory policies adopted by the Chairman, the development of wards had been affected.
Councilor Geeta Kumai said that health services should have been given more importance during the Corona epidemic but the Chairman showed much more interest in construction works. Councilor Darshan Rawat said that the board meeting of the Mussoorie Municipality should be held every month and its repeated adjournment was a conspiracy.
Councilors Jashoda Sharma and Sarita Kohli added that many works are being done in violation of the rules of the Municipality by the Chairman, which was not in the interest of Mussoorie. Councilors Sarita Panwar and Kuldeep Rauchela also made similar allegations. Nandlal Sonkar said that he was three-time councilor and there were no such occurrences in the past. He said that before adjourning the board meeting, the councilors should be contacted to know if they were on their way.
Executive Officer Ashutosh Sati said that the board meeting had been postponed by the chairman in the absence of quorum. According to the rules, the board meeting will be held within 15 days so that work can be done with the consent of the board for the development of Mussoorie.

Garhwal Post has established itself as a credible, balanced and forward looking newspaper in India. Based in Uttarakhand, the daily is read by the aware, socially and culturally responsible, high-income elite of society.
Contact us: info@garhwalpost.in
top asian dating sites high end matchmaker