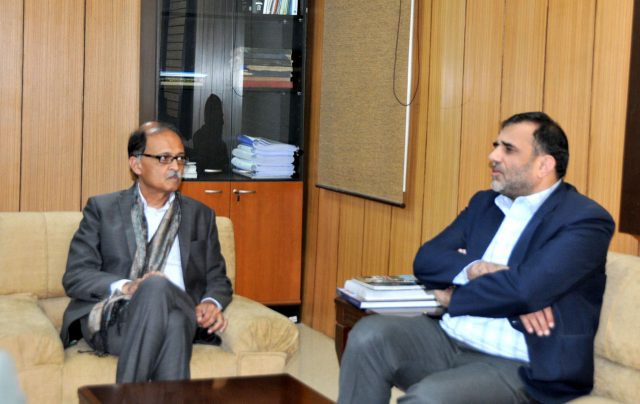 By OUR STAFF REPORTER
DEHRADUN, 12 Dec: Chief Secretary Utpal Kumar Singh met Union Commerce Secretary Anoop Vadhawan at the secretariat here on Wednesday and discussed ways and means to increase export rate in the state.
Singh said that there are ample opportunities of investment in Yoga and Ayush in Uttarakhand. He added that central government should help on the proposal of the state government for setting up of Spiritual Economic zones and instructed the concerned secretary to send the proposals to the Union government. It is to be mentioned that out of national export rate in agriculture, pharma and other products, the state export rate is 0.5 per cent. He requested the central government to help in reducing the logistic costs to double this export rate from the state. He also put forth a proposal for help in extending cargo facilities for mushroom produced in the state.
The Union Commerce Secretary said that a meeting between Air India and state government officials will be held soon in this regard. Chief Secretary had a telephonic conversation with Vice-chancellor of Pantnagar University to expedite the work of certification in a bid to boost exports of agriculture produce. It is to be mentioned that the central government has authorized Pantnagar University for certification of agriculture produce for exports.
Utpal Kumar expected necessary cooperation in the proposed projects of the state government related to the export-linked infrastructure development under the Trade Infrastructure For Export Scheme (TIES) of the Government of India. Secretary, Commerce asked the state government to send maximum proposals in this scheme. Chief Secretary drew the attention of the secretary towards the delay in GST refund to the exporters to which he assured resolution of the matter. Secretary Commerce told that during his talks, rice exporters of the state demanded that merchant exporters in the state should also be allowed concession in Market Fee and he has asked Chief Secretary to consider the matter. It was informed in the meeting that soon the export policy of the state will be brought before the cabinet.
The meeting was attended by President APEDA Paban Kumar Bor Thakur, Joint Secretary Commerce Keshav Chandra, Executive Director of FIEO Ajay Sahay, Uttarakhand Secretary R. K. Sudhanshu, D Senthil Pandian, R Meenakshi Sundaram, Director Industries Dr. Sudhir Nautiyal.