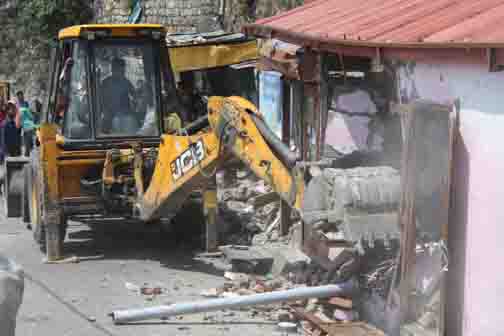 By Sunil Sonker
Mussoorie, 10 May: The administration has been continuously taking action against illegal encroachment on the road side in Mussoorie, under which the unauthorised construction on the stretch between Kincraig Chowk and Picture Road was demolished by JCB.
On the occasion, local people furiously accused the administration of discrimination. They said that the administration hadn’t removed encroachment done by many people. They claimed they had taken a stay on the demolition, but the SDM, Mussoorie, didn’t pay any heed and their entire shops were demolished. They complained that, now, they had no means of earning their bread and butter. They warned the administration that, if all the illegal constructions and encroachments that were marked were not demolished, then they would lauch a big movement against the administration affecting the upcoming tourist season.
Mussoorie Traders’ Association President Rajat Agarwal met the SDM and urged him to give notice to the people who had done encroachment before taking action, as many of them were ready to remove it by themselves. SDM Gopal Ram Binwal said that continuous action was being taken by the administration against illegal construction and encroachments on the roadside. He said he had instructed the Executive Officer to serve notices on the people that had constructed illegally to remove it within three day, otherwise demolition would be undertaken.