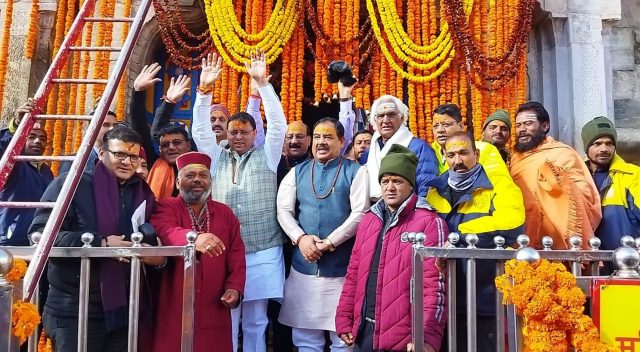 By Arun Pratap Singh
Dehradun, Kedarnath, 3 Nov: The Devasthanam Board controversy is refusing to subside. The issue has turned particularly sensitive in view of the upcoming Kedarnath visit of Prime Minister Narendra Modi, as well as the upcoming assembly elections in the state. Two days before the PM’s visit, Chief Minister Pushkar Singh Dhami again reached Kedarnath Dham, today, ostensibly to review preparations for the visit, but also to assuage the angry Teerth Purohits and the Panda Samaj. He was accompanied this time by Cabinet Ministers Harak Singh Rawat and Subodh Uniyal.
Uniyal had darshan of Baba Kedar for the second time in two days as he was here, yesterday, too. While official sources claimed that Dhami and his cabinet colleagues did not face any opposition in obtaining Darshan and had a long chat with the Teerth Purohits at Kedarnath, other sources claim that some slogans were raised during their visit. However, they were not stopped from entering the temple and obtaining darshan!
Sources added that CM Dhami spoke for a long time in a closed room with the Teerth Purohits and that the CM was able to calm them down to some extent by promising that their interests would be fully protected and their sentiments respected. Whether this is an indication that the Board may be dissolved soon or its powers will be diluted remains to be seen.
Sources said that, on Monday night, Chief Minister Dhami, BJP State President Madan Kaushik and some other office bearers of the party were summoned by Union Home Minister Amit Shah to Delhi, and along with other issues, the issue of Devasthanam Board was also discussed.
It is claimed that the CM and other senior BJP leaders have assured the Teerth Purohits that their sentiments will be respected and, after today’s meeting, the CM is hopeful that the PM’s visit to Kedarnath would be a smooth one. Of course, security in Kedarnath has been beefed up in view of Modi’s visit and in order to deal with any possible opposition as had been announced by the Teerth Purohits.
It may be recalled that former Chief Minister Trivendra Singh Rawat was not allowed to enter the temple when he reached Kedarnath two days ago.
Meanwhile, Dhami said in an informal conversation with the media that PM Narendra Modi had special faith in and reverence for Baba Kedar. He had a vision to develop Uttarakhand as the spiritual and cultural capital of the world. People from all over the world would come here for spiritual peace. For the first time in modern history, Kedarnath Dham was being rebuilt on such a large scale. The first phase work had been done. The second phase work was beginning. Modi would inaugurate the reconstructed Samadhi and unveil a statue of Adi Guru Shankaracharya. Dhami had said yesterday that dialogue was being held with the central government on the issue of the Devasthanam Board. The state government respected the sentiments of the people. The honour and respect of the priests would not be hurt.
Sources added that a proposal to dissolve the Board might be discussed in the next Cabinet Meeting scheduled to be held on 9 November. However, the situation in the meanwhile continues to be fluid and precarious!