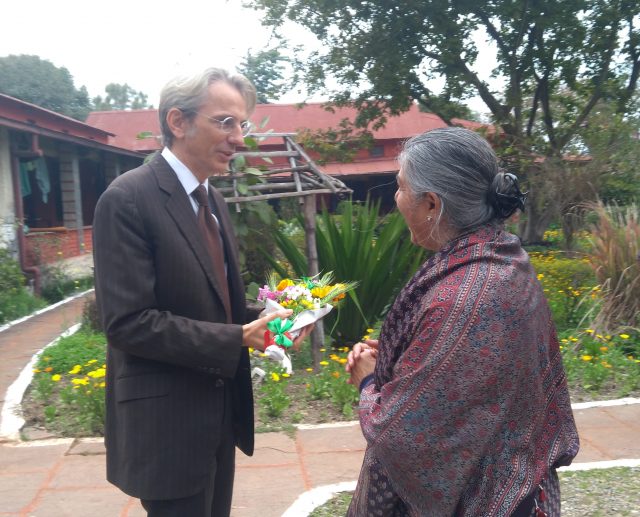 RAMGARH (DEHRADUN), 29 Feb: Emmanuel Lenain, Ambassador of the France and his team visited Navdanya Biodiversity Conservation farm, a center for excellence in Organic farming in village Ramgarh in Doon Valley. Clemence Vidal, Deputy head of the French Development agency in Delhi and Romain Otal who is the Political Counsellor at the French Assembly were the team members of Lenain. 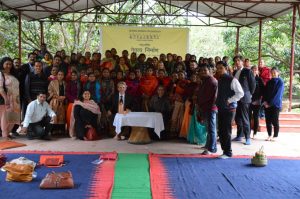 Ambassador of the France during his visit was received by Dr. Vandana Shiva, founder of the Navdanya Trust. Wg. Cdr. (retired) Kuldip Shiva, a senior member of Navdanya with J. P. Khali, Manager of Navdanya were present at the time.
He was taken on a conducted tour by Dr. Shiva and her team. He visited Seed Bank and saw the diversity of indigenous seeds of more than 2000 crops including 750 rice varieties, 220 wheat varieties, 125 of vegetable varieties and many more of forgotten foods like millets, oilseeds, pulses, etc.
During the farm visit, he was shown the diverse crops grown together and how they help each other while growing together and also enrich the soil. Mix cropping, mulching, crop rotation, companion cropping, and agroforestry plants were also shown to the Ambassador. Dr. Vandana Shiva detailed them about biodiversity based organic farming in India by 100000 (ten lacks) farmers member of Navdanya. After visiting the farm he had a brief interaction with 80 women farmers of Mahila Anna Swaraj Samooh.
The Ambassador of the France also had the diverse Organic food in Navdanya Kitchen.
‘’Navdanya is doing wonderful in the field of Biodiversity based Organic Farming.Mahila Anna Swaraj Samooh (MAS) are saving the seed and growing healthy food in different agroecological area of India. This Seed saving movement is the best programme to save the nature and our traditional healthy food system’’, Lenain said.

Garhwal Post has established itself as a credible, balanced and forward looking newspaper in India. Based in Uttarakhand, the daily is read by the aware, socially and culturally responsible, high-income elite of society.
Contact us: info@garhwalpost.in
https://garhwalpost.in/best-bbw-dating-apps/