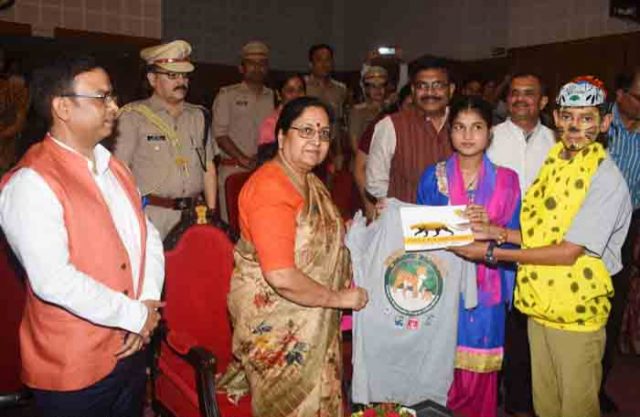 DEHRADUN, 3 Oct: Governor Baby Rani Maurya said today that forest guards had a very important role in forest and wild life conservation. Forest guards needed to work fearlessly and without pressure or allurement. Governor Maurya expressed these views while participating in the Wild Life Conservation Week Programme 2019 organised by the Forest Department at Raj Bhawan, here, today. She also released the quarterly newsletter of the forest department, a brochure on rare birds, and a poster of animals of rare species designed by the Biodiversity Board. A short movie on bird watching was also screened during the programme. An MIS and mobile app under the “Secure Himalaya Project” were also launched by the Governor. She said that the people of Uttarakhand had been connected with forests and wild life culturally and traditionally. The state was the land of Gaura Devi, who set a great example of environment conservation through the Chipko movement. She added that man-animal conflict was increasing due to growing population and encroachment by human beings in forest areas. People had to pay attention to planting of trees, river rejuvenation and wild life conservation. Children ought to plant trees on their birthdays and parents’ birthdays. Principal Secretary Anandvardhan said that local communities and common people ought to be involved in wild life conservation. Chief Forest Conservator Jai Raj revealed that people were being involved in wild life conservation. The Forest Department is working on the rejuvenation of springs in the state. Nature camps were being held for school children. A City Forest was being developed at Jhajhra, Dehradun. Secretary to the Governor, Ramesh Kumar Sudhanshu recalled that conservation of wild life was a part of cultural heritage. The Earth was considered the mother in Atharva Veda. There was need to respect and take care of nature and the environment like one would one’s mother. Present on the occasion were Chief Wild Life Conservator Rajiv Bhartari, senior officials of the forest department, forest rangers and students of various schools.

Garhwal Post has established itself as a credible, balanced and forward looking newspaper in India. Based in Uttarakhand, the daily is read by the aware, socially and culturally responsible, high-income elite of society.
Contact us: info@garhwalpost.in
https://garhwalpost.in/singles-parties-london/ singles belfast