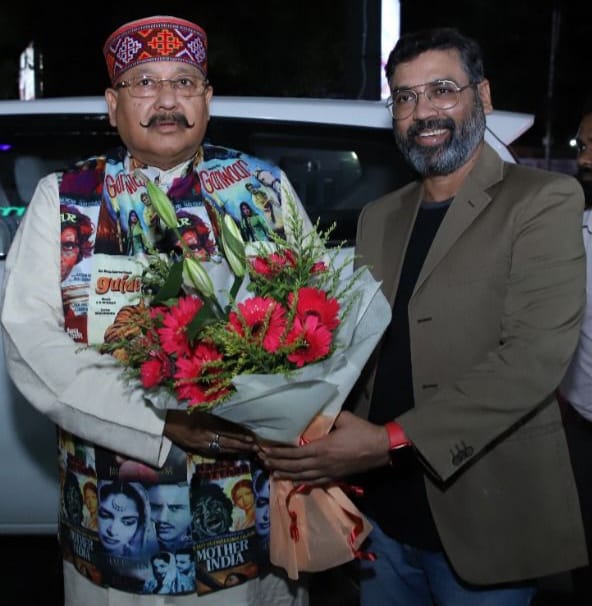 Dehradun, 20 Sep: Dehradun was abuzz with hype on 19 September as Fortune Talkies Motion Pictures hosted the red-carpet premiere of their Uttarakhandi feature film ‘Maati Pehchaan’ at PVR Pacific. Minister of Culture & Tourism Satpal Maharaj was the Chief Guest.
The mega premiere event also saw the entire team of ‘Maati Pehchaan’ in attendance, including the lead cast Karan Goswami and Annkita Parihar, as well as the film’s director, Ajay Berry, and producer, Faraz Shere. 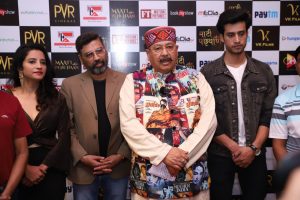 Satpal Maharaj pays a tribute to cinema in his designer jacket at the premiere. OHO Radio’s RJ Kavya and RJ Gaurav from Red FM were also present. They were all praise for the film and promised to promote it on their platforms.
‘Maati Pehchaan’ has been a highly anticipated film in Uttarakhandi cinema’s history. While utilising local talent as its cast and crew, and shooting in various picturesque locations of Uttarakhand, the film has been made with the sensibility of any mainstream Bollywood film. Yet, at its heart, ‘Maati Pehchaan’ remains deeply Uttarakhandi as it aims to capture the lives and struggles of its people and the deep connection they have with the mountains.
Speaking about the film at the red-carpet, producer Faraz Shere said, “To me ‘Maati Pehchaan’ has been the culmination of a very long and challenging journey. We started this film in 2018 and were very excited to be making something of this kind in Uttarakhand. Of course, being our first feature film, we gave it our all, but nobody knew that it would end up taking so long to finally arrive in cinemas. 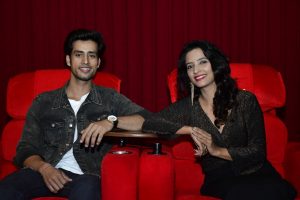 But we are very happy with the finished film and can’t wait to see how the people of Uttarakhand respond to it as it is especially dedicated to them.”
Director Ajay Berry said, “We have made this film with a lot of honesty and commitment to telling a uniquely Uttarakhandi story that will resonate with the people. And it’s very satisfying to see the positive responses we have been getting for our trailers and songs. We just can’t wait for the people to watch the film and make it their own.”
Culture and Tourism Minister Satpal Maharaj said, “The film Maati Pehchaan is creating its place in the hearts of the people, and inspiring them not to leave their soil. It’s a very good film, the entire team has done a great job and we encourage such endeavours. We will try to make this film tax free in Uttarakhand. I would also like to request all the residents of Uttarakhand to watch this film with their families.”
Maati Pehchaan stars debutantes Karan Goswami and Annkita Parihar and an ensemble of accomplished theatre and film actors from Uttarakhand in supporting roles like Chandra Bisht, Vanya Joshi, Aakash Negi, Padmender Rawat, Prakash Joshi, Rekha Patni and Naresh Bisht, who plays the villain in the film. The screenplay has been written by Man Mohan Chaudhary. The film has been shot by cinematographer Farooq Khan, edited by Mukesh Jha, while Pragya Tiwari is the Executive Producer of the film. Faraz Shere also serves as the Creative Producer.
It is the first feature film produced by Fortune Talkies Motion Pictures and marks its beginning in the arena of filmmaking after a decade-long stint in advertising. The movie will be distributed theatrically by VK Films, and Hungama Digital Media handling the film’s digital distribution with online ticketing partners Book My Show & PayTM.
The trailer, teasers & songs are available on YouTube. ‘Maati Pehchaan’ is slated to release in cinemas all across Uttarakhand on 23 September.

Garhwal Post has established itself as a credible, balanced and forward looking newspaper in India. Based in Uttarakhand, the daily is read by the aware, socially and culturally responsible, high-income elite of society.
Contact us: info@garhwalpost.in
calgary dating