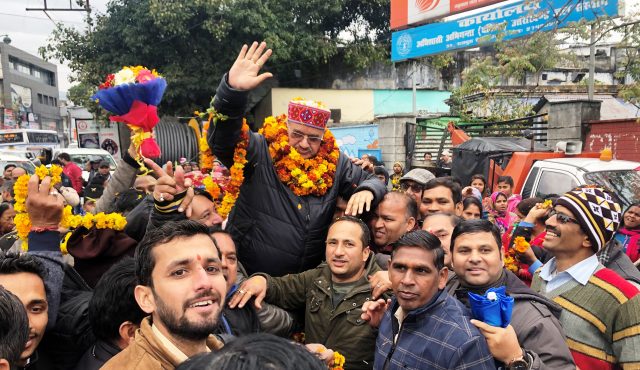 DEHRADUN, 7 Mar: It is time of celebration in the BJP after the announcement by Chief Minister Trivendra Singh Rawat to make Gairsain the summer capital of Uttarakhand. Mussoorie MLA Ganesh Joshi today claimed that there was lot of excitement and joy among the party workers from his constituency following the declaration by the CM. He informed that the CM and the party MLAs were given a warm and enthusiastic welcome at various places across the state following the decision. Ganesh Joshi paid his respects to the martyrs of Uttarakhand movement at Court compound here today. He said that it was because of the sacrifices of women and young men and women who laid down their lives during the agitation for Uttarakhand state that Uttarakhand was formed as a separate state.
He reminded the gathering of the physical suffering he and other activists for the movement had to undergo during the agitation. It had been a long standing demand of all activists that Gairsain be made Uttarakhand’s summer capital.
Joshi also claimed that CM Trivendra Singh Rawat, by this declaration, had created history. Earlier in the day, MLA Joshi also visited Shaheed Sthal in Mussoorie and paid his respects in the presence of the family members of the Uttarakhand martyrs.
In Dehradun, he was welcomed by BJP workers from Sridev Suman Nagar Mandal and Amar Shaheed Major Durgamal Mandal at Mussoorie Diversion Road and at Dilaram Chowk. Mandal President Rajeev Gurung expressed his gratitude towards MLA Joshi for his persistent efforts in voicing this demand in favour of Gairsain and he also thanked the CM for acceding to this demand.
On this occasion BJP Mandal President Rajiv Gurung, Surendra Rana, Rakesh Joshi, Minister of State TD Bhutia, District Panchayat Vice President Deepak Pundir, Councilor Bhupendra Kathait, Councilor Sanjay Nautiyal, Yogesh Ghathat, Chunnilal, Manjeet Rawat, Vishal Kulhan, Jyoti Kotia, Rahul Rawat, hundreds of workers including Sundar Kothal, Surendra Bagriyal, Anita Shastri, Arvind Doval, Ashish Thapa, Councilor Satyendra Nath were present.