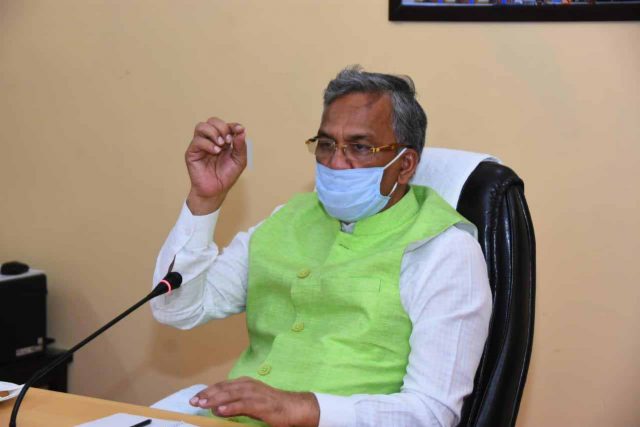 DEHRADUN, 5 Jun: Chief Minister Trivendra Singh Rawat said today that the summer capital of the state, Gairsain, would function as an e-Vidhan Sabha. He was speaking on the occasion of World Environment Day.
He added that the Uttarakhand Government had launched an e-cabinet and that that the government offices were in the process of turning into e-offices. So far, 17 offices had become e-offices. The effort is for all the offices up to the block level of the state to be made e-offices.
Speaking on the occasion, he called for protection of the environment and stressed that it was the collective responsibility of all. All would have to make efforts with public participation to get rid of environmental pollution and maintain biodiversity.
He chaired a video conference on the occasion with the district magistrates today. He called for greater research on how to strike a proper balance between the environment and human activity. On this occasion, the Chief Minister also released a book related to the environmental report on Uttarakhand state.
The Chief Minister said that following the physical distance on Harela festival, a large scale tree plantation would be carried out. He instructed the district collectors to pay special attention towards public participation for planting trees on Harela festival. Public cooperation was very important to make any campaign successful, he emphasised. He said that the District Magistrates ought to work towards the revival of rivers and sources of water in their districts. The state government had set a target of revival of Rishiparna and Kosi rivers in mission mode. A project report had been prepared by IIT Roorkee for the river Rispana.
Forest and Environment Minister Harak Singh Rawat said that Uttarakhand made an important contribution to maintaining biodiversity in India. Uttarakhand had 28 percent of the country’s biodiversity. The biodiversity here influenced not only the entire country but the whole world. He added that humans would have to move forward in full balance with nature.
It was stated at the meeting that a city forest under the name of ‘Anand Van’ was being developed in Jhajhra, Dehradun. Uttarakhand Environmental Protection and Pollution Control Board was preparing district level pollution control management plans for each district. At the meeting, IT Advisor to the Chief Minister Ravindra Dutt, Principal Secretary, Forest, Anand Vardhan, Migration Commission Vice Chairman SS Negi, Principal Chief Conservator of Forests Jayaraj, Director, Uttarakhand Environmental Protection and Pollution Control Board, SP Subuddhi were among those present.