DEHRADUN, 25 Dec: Chief Minister Pushkar Singh Dhami said that good governance was the BJP Government’s weapon and ultimate goal. Participating in a “New Uttarakhand programme organised at Ganga Resort Rishikesh, Dhami said that whenever he looked towards the mountains, he heard the echo of courage, honesty, everlasting faith and divine light. This resonance of the mountain and the continuous stream of the Ganges also gave him inspiration for development.” The Chief Minister said that people’s opinion and dialogue played a very important role in development. 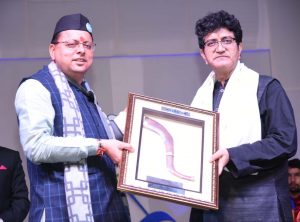 The government has started the Bodhisattva Thought Chain Programme on how to work with coordination between the government and the people in the coming years on all the issues like migration, employment, health, education. Through this the government was getting suggestions from experienced people who have worked in various fields. He said that the government has conducted 4 series of Bodhisattvas so far. Under this programme the aim was to accelerate the pace of development of Uttarakhand through subject experts of respective fields. On this occasion, Dhami also paid tribute to CDS General Bipin Rawat on behalf of the entire state. He said that the government would definitely fulfil the vision of the brave martyr General Bipin Rawat for Uttarakhand, and would follow the path shown by him and would continue to work for the sustainable development of Uttarakhand as per his vision. He said that every possible help was being provided by him for the military Dham to be built by the Uttarakhand government. While paying homage to former PM Atal Bihari Vajpayee on his birthday, he said that the state of Uttarakhand was his gift. He said that today was celebrated on the occasion of Good Governance Day and the BJP Government was moving ahead with this vision of good governance. Dhami said that with the guidance of Prime Minister Narendra Modi and the cooperation of the Central Government, many such works have been done in the state, which could not have been imagined earlier. Modi has made the dream of taking the railways to the mountains come true. Today, the work on Rishikesh-Karnaprayag rail project and strategically and geographically important Tanakpur-Bageshwar rail project was progressing rapidly. Similarly, work was also being done on Char Dham All Weather Road, Bharat Mala Project at a fast pace. Char Dham Yatra is the lifeline for Uttarakhand and these projects would facilitate Char Dham Yatra, promote tourism and bring revolutionary changes in the state’s economy. Delhi Dehradun Expressway would further reduce the distance from Dehradun to Delhi. Kedarnath reconstruction work was in the final stage. The foundation stone for projects worth Rs 400 crores has been inaugurated by the Prime Minister here. A plan of 250 crores has been made for the beautification of Badrinath Dham. The Chief Minister said that from connectivity to conservation, from employment to women empowerment, from organic state to spiritual eco-zone, from making healthy Uttarakhand to prosperous Uttarakhand, Prime Minister’s support was always there. The focus was on tourism, AYUSH, wellness, IT, solar energy and service sectors for investment in hill areas.